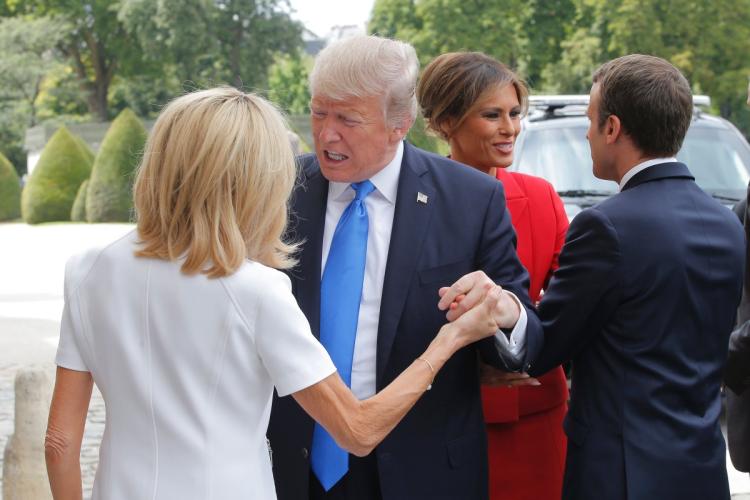 Shortly after President Trump arrived in France on Friday for an official visit, he took a moment to tell the country’s first lady, Brigitte Macron, what he thought of her physical appearance.

“You’re in such good shape,”  Trump told Mrs. Macron, who was standing in a grand marble hall with her back to a camera that recorded the incident. He then turned to the president of France, Emmanuel Macron, and said, “She’s in such good physical shape.”

“Beautiful,” Mr. Trump said, turning to the first lady of France. She appeared to grab Mr. Trump’s wife, Melania, by the arm and take a step backward. Mrs. Trump stood next to her, smiling.

The encounter happened during a tour of the Hôtel National des Invalides, a museum complex in central Paris that houses the tomb of Napoleon Bonaparte. It was broadcast live on a Facebook video stream on Macron’s official Facebook account. A clip of the episode soon spread widely online and in the news media.

Trump has repeatedly commented publicly on the physical appearance of women he has encountered either as a presidential candidate or as president — including the comedian Rosie O’Donnell and, now, the first lady of France.

Last month,Trump was criticized by members of both parties for attacking the cable news host Mika Brzezinski in a string of tweets, describing her as “low I.Q. Crazy Mika” and claiming that at a past meeting she had been “bleeding badly from a facelift.”

Earlier in June,Trump interrupted an Oval Office phone call with the prime minister of Ireland, Leo Varadkar, to comment on the physical appearance of Caitriona Perry, a Washington correspondent for Ireland’s national broadcaster.

After Ms. Perry introduced herself, Trump told Varadkar, “She has a nice smile on her face so I bet she treats you well.”

Mr. and Mrs. Trump are in France to celebrate Bastille Day, the French national holiday, and to commemorate the 100th anniversary of the American entry into World War I, a conflict largely fought on French soil.