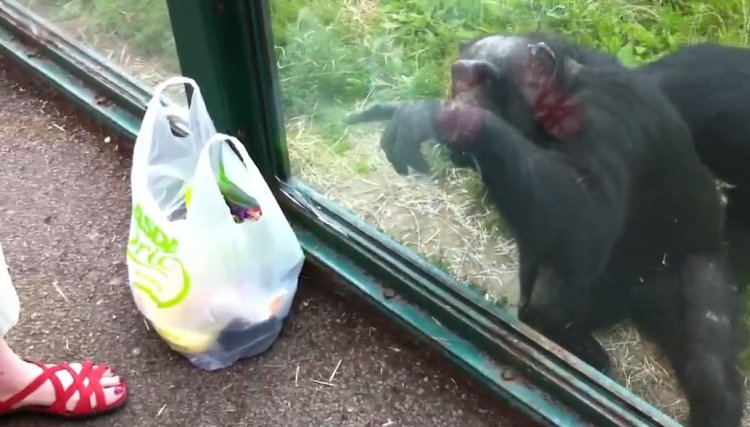 Like many other apes, chimpanzees are known for their intelligence, which often manifests itself in the form of feats more commonly associated with humans.

One chimpanzee at the Welsh Mountain Zoo in the UK showed skills at conveying his message and also patience when he wanted a drink. He requested a visitor to give him a sip by repeatedly pointing at a bag where she had a bottle, and once she showed him the bottle, he guided her to a small opening from where the woman could pour the drink.

As the video above shows, once the visitor realised what the chimpanzee wanted – it wasn’t a banana – and pulled the bottle out, he guided her over to an opening into which she could pour him some of the drink. The visitor happily obliged, and he slurped it up.

In another video of the same zoo, a chimpanzee can be seen signalling visitors to lift the window in what seems to be a request to help him escape. He also makes a gesture with his fingers which means ‘gate’ in sign language and the visitor interprets it as an appeal for freedom.

Zoo staff also mentioned seeing chimpanzees use signs to guide visitors to what they want.