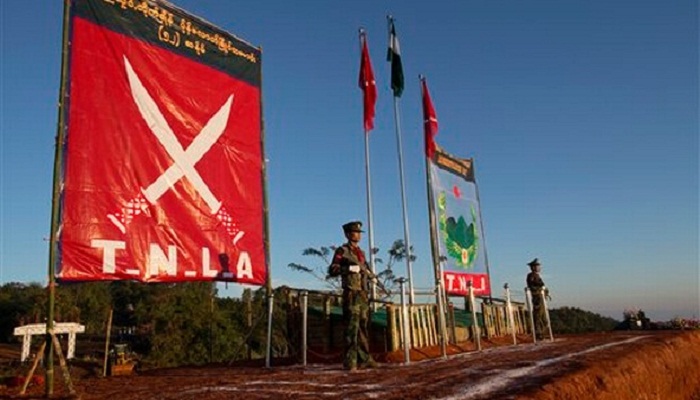 YANGON: Myanmar granted its military unprecedented powers to deal with fighting between ethnic minority rebels and government troops in the Kokang region, after week-long clashes left dozens of soldiers dead and sent tens of thousands of refugees fleeing to neighboring China.

Two announcements, signed by Myanmar President Thein Sein, were read out on national television late Tuesday declaring a 90-day state of emergency and that a military administration had been imposed in the northern special region.
A state-run newspaper, the Myanmar Ahlin daily, reported an attack on a Myanmar Red Cross convoy. It says the seven-car convoy carrying 100 civilians was under a Red Cross flag when it was attacked about 50 kilometers (30 miles) south of the regional capital of Laukkai. A Red Cross worker and a truck driver were hurt. The Ministry of Information blamed the attack on Kokang rebels.
Myanmar, a predominantly Buddhist nation of 50 million people, only recently emerged from a half-century of military rule.
Thein Sein’s elected government, which came to power in 2011, has previously declared states of emergency because of sectarian conflict in the western state of Rakhine and for localized instances of fighting between Buddhists and Muslims.
But it was the first time his government has imposed a military administration, which gives the army executive and judicial powers in the designated region. The clause permitting this is in the 2008 constitution, which was drawn up under a military government, and is one of several that enables the military to continue to dominate the government.
Independent political analyst Yan Myo Thein said the assumption of such powers by the military is likely to draw scrutiny from other ethnic groups which, like the Kokang, are seeking greater autonomy in their areas. And it comes as the government tries to sign a nationwide peace accord with those groups and ahead of the elections that are supposed to be held later this year.
According to the government, as of Monday, more than 50 troops had been killed and 73 wounded since last week, while 26 were killed on the Kokang side.
State-run media said Tuesday that during the visit to a hospital treating wounded soldiers, Thein Sein vowed that his government “will not lose an inch of Myanmar territory.”
The fighting has forced people to flee over the border. Citing government officials, the Chinese state-owned news site Yunnan.cn said Monday that there had been 30,000 border crossings by Myanmar nationals over the past week into Yunnan province.
Lin Sen, a volunteer helping refugees in Yunnan, said by phone Tuesday that as many as 50,000 refugees may have escaped Kokang.
Kokang is dominated by ethnic Han Chinese, and the region has been embroiled in fighting since conflicts between the Kokang rebels and government troops intensified on Feb. 9.
“The announcement of military administration has no impact on us. This will only make the lives of Kokang people living in Laukkai difficult,” Htun Myat Lin, general secretary of the Kokang rebel group, said by phone Tuesday. He said government troops had occupied Laukkai.
He says his group is seeking autonomy for Kokang and its ethnic Han Chinese people.
“We want to have a high degree of autonomy where we can manage our own affairs, but we do not wish to split the country of Myanmar,” Htun said, adding that ethnic Han Chinese are treated as second-class citizens in Myanmar.
Though preliminary peace pacts have been reached with most of the ethnic groups, clashes occasionally occur with Kachin, Shan and others. In addition to control over jade, timber and other natural resources in areas under their control, they want assurances that they will have some say over future troop movements.