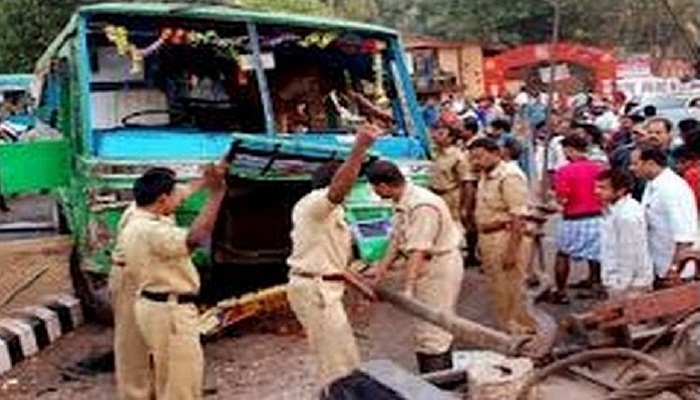 INDORE: A private bus with around 55-60 passengers on board plunged into a gorge from Machaliya Ghat hillock in Dhar district on Monday night, killing at least 10 passengers and injuring 33 others.

The accident took place when the private bus on way from Indore to Galiakot in Rajasthan plunged into a 150ft-plus deep gorge at around 9.15pm from the hillock on Dhar-Jhabua border, which is 125km from Indore.
Most of the passengers, including women and children, who were traveling by the private bus, hail from Indore and Dhar districts. The passengers, including two policemen were on way to the Muslim pilgrimage of Galiakot in Dungarpur district of Rajasthan, sources present at the accident spot claimed.
SDM-Jhabua A Patidar, who is among the officials camping at the spot confirmed 10 deaths, including a woman and a minor and injuries to 33 other passengers who are being rushed by 8-10 ambulances to the nearest hospitals. The dead count is feared to rise as hunt is underway with search lights in the jungles for more possible bodies and injured.
Primary police investigations suggest that the bus plunged into the gorge, after losing balance on the hilly road in Rajgarh area of Dhar, around 125km from Indore.