Putin Visit to Hungary Shows He Still Has Friends in Europe 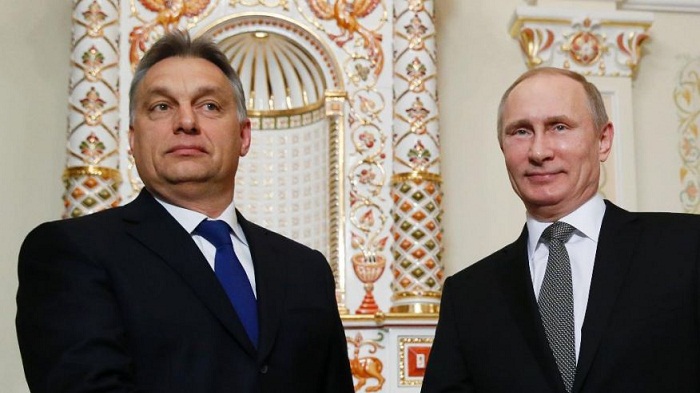 Russian President Vladimir Putin travels to Budapest on Tuesday to meet the leader some Hungarians cast as his alter ego — "Little Putin."
It's a striking moniker for Hungarian Prime Minister Viktor Orban, who rose to international prominence in the 1980s as an anti-Soviet student leader. His transformation into a populist who cozies up to the Kremlin and stifles dissent mirrors a broader eastern European narrative in which rebellion against Moscow has evolved into mixed feelings about the neighboring Russian giant. Leaders in Hungary, Serbia, Slovakia, and the Czech Republic all increasingly play a double game of courting EU riches while also flirting with Russian patronage.
Some 2,000 people marched Monday evening in downtown Budapest to protest Putin's visit, calling on Orban to stop the "Putinization" of Hungary.
"The pestering of civic groups, corruption and the fattening of oligarchs show that we are getting ever closer to the Russian model and farther from the European one," said protest organizer Gabor Vago.
The rise in support for Russia despite its aggression in Ukraine is playing out among some eastern European governments and ordinary people who may identify more with the political certainties of Russia than the complicated, messy and sometimes painful ways of Western-style democracy.
For Putin, now shunned by many nations around the world, the visit is important because it shows he still has friends even within the European Union. Orban has much more down-to-earth concerns: He is seeking a good price for the Russian gas Hungary desperately needs, as well as assurances that Russia will make good on a promise for a 10 billion euro loan to upgrade a Hungarian nuclear reactor.
"It is important for Moscow to show that there still are states whose governments are ready to host Russia," said historian and Russia expert Zoltan Sz. Biro. "Symbolically, the meeting is much more important for Russia."
Serbia, which has traditionally good relations with Russia, has also been playing a balancing act, carefully nurturing its bid to join the EU while maintaining close ties with Moscow. There is even an apparent split within the Serbian leadership over which way Serbia should go. Prime Minister Aleksandar Vucic appears to be leaning toward the EU, while President Tomislav Nikolic is a traditional "Russophile."
Serbia has so far refused to join sanctions against Russia, despite pressure from the West. Russia's propaganda machine is very active in Serbia, with a Russian Serbian-language radio launching at the beginning of this year.
Across the former Soviet bloc there are countries — like Poland and Romania — that are deeply critical of Russia. But even in Poland, for example, the presidential candidate for the main left-wing party said the country could not afford to continue being described as "enemy No. 1" in the Russian media and called for dialogue between Warsaw and Moscow.
The support for Russia across eastern Europe is due to a potent cocktail of ideological leanings and the need to avoid threatening ties with their major energy supplier. Many in the region are suffering economically due to the sanctions and Russia's ban on European food imports.