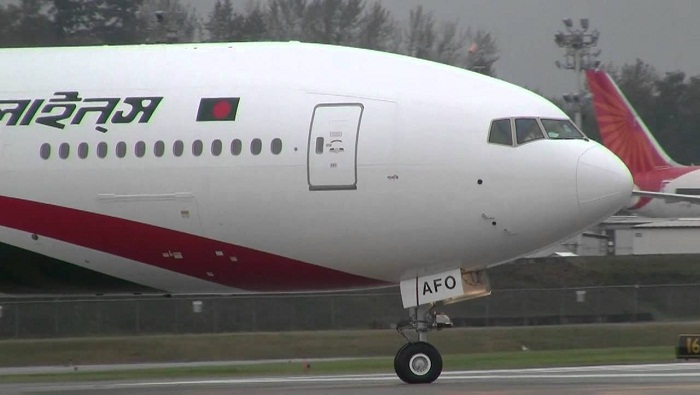 Biman Bangladesh Airlines, widely known as a hub of mismanagement and corruption, is counting huge losses because of its two low-quality Boeing aircraft taken on lease through ‘massive irregularities’.

The Biman authorities leased two Boeing 777-200 ER aircraft from Egypt for five years in 2014. One of them has been grounded for five months due to engine failure while the other lies inoperative.

Sources concerned said that a syndicate at the national flag carrier’s office is involved in leasing low-quality aircraft for their own financial interest instead of purchasing them.

The syndicate indulged in massive corruption and irregularities in leasing two Boeings aircraft from Egypt, a Biman official said on condition of anonymity.

Currently, Biman is suffering Tk 5 crore losses per month as the two aircraft are not in operation, he said, adding that some corrupt officials are blamed for it.

Under a dry lease agreement, the two aircraft cannot be returned to the lessee – EgyptAir – before the expiry of the lease period in February, 2019 and as a result, Biman has to count losses till 2019 and the total loss will stand at around Tk 160 crore.

Col (rtd) Faruk Khan, Chairman of the Parliamentary Standing Committee on the Ministry of Civil Aviation and Tourism, said massive irregularities have been found in their probe report.

“We’ve already submitted the report to the ministry,” he added.

“Probe report has been completed this month. We’ll hand it over to the Biman authorities in the next meeting and recommend action,” he said.

A former Biman official said that then Biman management leased the two Boeing aircraft hastily though their condition was not good at the time.

According to Biman’s finance division, the financial loss of the national flag carrier is mounting because of the two aircraft.

Biman cannot recover the loss and the two aircraft will most likely to remain inoperative until the expiry of the agreement in 2019.

According to the lease deal, Biman authorities can return the aircraft to EgyptAir in running condition.  The repair of the aircraft will cost Biman huge amount of money.

Currently, Bangladesh Biman has 13 aircraft in its fleet and seven of them have been leased from different countries. Five others also are not in good condition.

A leased Biman aircraft has been grounded at Dammam Airport for months and engine of another got dysfunctional which was later repaired.

The authorities have also a plan to lease two Boeing aircraft for the next hajj season.

Biman sources said that the finance division and top officials of the national flag carrier prefer lease system for getting commission.

Shakil Meraz, a spokesperson of Biman, said, “Sometimes we need to lease aircraft to tackle additional pressure of passengers and maintain flight schedule.”