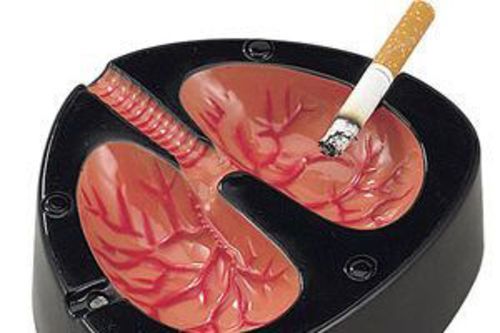 How common lung cancer is
Lung cancer is the second most common cancer in the United Kingdom (excluding non melanoma skin cancer). Around 43,500 people are diagnosed in the UK each year.
Smoking and lung cancer
By far the biggest cause of lung cancer is smoking. It causes more than 8 out of 10 cases (86%) including a small proportion caused by exposure to second hand smoke in non smokers (passive smoking).
Here are some facts about smoking and lung cancer

The more you smoke, the more likely you are to get lung cancer but the length of time you have been a smoker is even more important than how many cigarettes you smoke a day
Starting smoking at a young age is even more harmful than starting as an adult
Stopping smoking reduces your risk of lung cancer compared to continuing to smoke. The sooner you quit, the better your health - but it's never too late
Passive smoking (breathing in other people's cigarette smoke) increases the risk of lung cancer, but it is still much less than if you smoke yourself
It is almost impossible to work out the risk of occasional passive smoking. We know that the risk of lung cancer for passive smokers goes up the more cigarette smoke they are exposed to. Overall, people exposed to environmental tobacco smoke at work or at home have their risk of lung cancer increased by about a quarter compared to people who are not exposed to it. Heavy exposure to environmental tobacco smoke at work has been shown to double the risk of lung cancer.
Cigarette smoking is the main cause of lung cancer. But pipe and cigar smokers are still much more likely to get lung cancer than non smokers. They are also much more likely to get cancer of the mouth or lip.
In the past, lung cancer has been more common in men than women. Now, because more women smoke, it is almost as common in women.
However long you have been smoking, it is always worth giving it up. Go to smokefree.nhs.uk to find a range of free information and support. Or talk to your GP, practice nurse or pharmacist.
Other risk factors
Some other things increase lung cancer risk. But they increase the risk by only a small amount and far less than smoking.  They are:
Exposure to radon gas
Air pollution
Previous lung disease
A family history of lung cancer
Past cancer treatment
Previous smoking related cancers
Lowered immunity
Exposure to certain chemicals

Exposure to radon gas
Radon gas is a naturally occurring radioactive gas which comes from tiny amounts of uranium present in all rocks and soils. The radon gas can build up in homes and other buildings. The highest levels have been found in south west England, but higher than average levels may be found in many other parts of the UK.
Radon is one of the biggest causes of lung cancer after smoking. The risk from radon increases the risk from smoking. Smokers with high indoor levels of radon have a particularly high risk of getting lung cancer. So if you live in a high radon area, it's even more important to stop smoking. If you are worried about this, UK Radon has information and advice, including how to check radon levels in your house.
Exposure to certain chemicals
A number of substances that occur in the workplace may cause lung cancer. In particular, these include asbestos, silica, and diesel exhaust. Exposure to asbestos in the construction industry and shipbuilding is now much lower than in the 1960s. But asbestos is still a cause of lung cancer because cancers take so long to develop. And smokers are at even higher risk.
Silica which is used in glass making, may cause a condition known as silicosis. This condition increases the risk of lung cancer.
People at the highest risk of lung cancer caused by diesel fumes are miners and professional drivers. You can find more Information about workplace cancer risks on this link.

Diet
Physical activity
Aspirin
Having multiple sclerosis
Diet
Researchers have recently been looking into links between vitamins and lung cancer. Fresh fruit and vegetables may help to prevent cancer because they contain chemicals that can prevent cell damage. The antioxidant vitamins A, C and E were thought to help reduce the risk of lung cancer, but the evidence for this is not clear. But there is now evidence that flavonoids, found in many fruits and vegetables, could help to reduce lung cancer risk. More research is being carried out to help unpick which particular nutrients in fruit and veg help the most.
Changing your diet won't reduce your risk of lung cancer much if you carry on smoking. The most important thing by far is to stop smoking.
Researchers have looked into whether taking extra vitamin E and beta carotene may help stop smokers getting lung cancer. The body uses beta carotene to make vitamin A. Early results suggest that vitamin supplements do not help to prevent lung cancer. They may even be harmful in smokers or people who have been exposed to asbestos in the past. Another similar substance to beta carotene, called beta cryptoxanthin, is found in fruits such as oranges and mangoes. It may lower lung cancer risk, but we don't know how it affects smokers yet.
Physical activity
Studies show that higher levels of physical activity may lower lung cancer risk. This includes activity at work, at home, and leisure activity such as walking or golf. Research into this area is continuing.
Aspirin
Some research has found that taking aspirin might reduce lung cancer risk. But other studies haven't found a link. Others have found that aspirin may only reduce risk in people taking 7 tablets a week or may only reduce risk in men.
You should not take aspirin regularly without checking with your doctor first. Drugs like aspirin can damage the lining of your stomach and may cause bleeding.
Multiple sclerosis
People with MS may have a lower risk of lung cancer, according to some research looking at results of a number of studies (a meta analysis). This is despite smoking being a possible cause of MS and a definite cause of lung cancer.