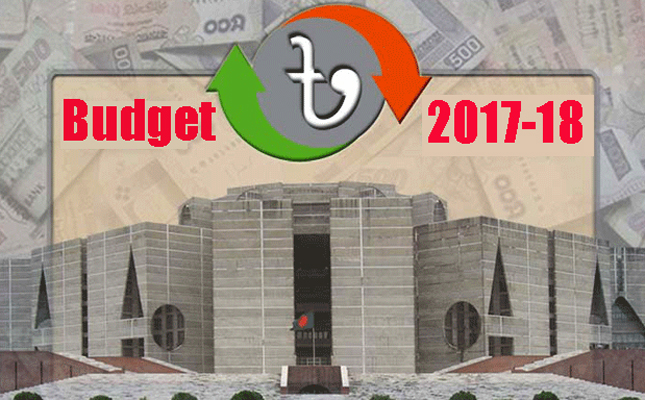 Country’s economists and businessmen hailed the  national budget passed at the Jatiya Sangsad on Thursday, a day after ratification of the finance bill with some changes, including one that suspended 15 percent VAT on all products and services to the relief of producers and consumers.

They opined that the government may enhance its capacity to implement the new VAT regime after two years, for which the provision has been suspended.

They also termed the national budget for fiscal year 2017-18 big one for being business and people friendly.

They also think the revenue target set by the government is achievable under the existing VAT law.

“I welcome the decision. The uniform 15 percent VAT rate was too high and we – the government and businesses - are not prepared to implement the new law”, economist, also former caretaker government adviser AB Mirza Azizul Islam told daily sun.

The government should do a few things - strengthening its capacity to implement the VAT law and settling the VAT rate, he opined.

About the high revenue target, he said the revenue target from VAT is around Tk 24 thousand crore more than the current fiscal, which is achievable.

“If the extent of VAT net is expanded, it will help  raise the VAT collection. Besides, in line with the normal course, the business transaction goes higher with the rise of national production, which will help grow revenue”, he said.

“We were concerned about the VAT rate and its implementation by addressing impact on consumer level”, he said.

In order to attain the middle-income country status, a huge reform is needed in the financial structure and it was big financial reform. But the government held it for two years.

At the same time, country’s business leaders welcomed the budget as the government paid attention to the business community for the sake of countrymen.

“It is a great honour that the government attached  due importance to the opinions of common people and business community. We believe that this people-friendly government cannot take any decision ignoring people’s demand”, Shafiul Islam Mohiuddin, president of Federation of Bangladesh Chambers of Commerce and Industry (FBCCI) told daily sun.

The president of country’s apex trade body also said if the VAT, duty, SD and tax are realised properly, the revenue target will not be a challenge anymore.

“The budget is business and people-friendly. But, it is not apparel industry-friendly due to the 1 percent tax at source for RMG industry. Our business is on a gradual downtrend, which needs policy supports. The tax rate should be 0.5 percent”, BGMEA President Md Siddiqur Rahman said.

Dhaka Chamber of Commerce and Industry (DCCI) welcomed the amendments made in the proposed budget through approving the Finance Bill 2017- deferring the plan to enforce the VAT and SD Act 2012 for another two years and reinstating the existing VAT Act 1991, keeping the multi-stage VAT rates replacing   proposed uniform 15 percent VAT.

DCCI also welcomed the new slab of reduced excise duty on small bank deposits from Tk 800 to Tk 150 on balance above Tk 1 lakh to Tk 5 lakh.