Bulbuly, a success story of One House One Farm 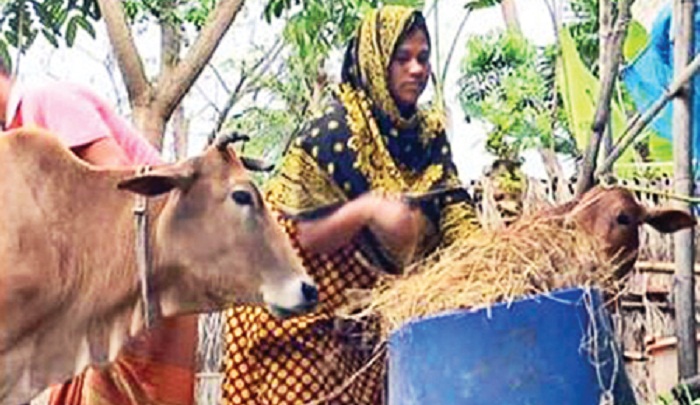 The days of hardship that Bulbuli Begum went through in the past few years now seemed a long nightmare. She was absolutely clueless about what she should do after sudden death of her husband. But a state-supported project lit a light showing her the way of survival with her daughters and sons.

When she was in frantic move in search of a good job for decent living, the One House One Farm Project" was launched in her village Kholash of Dupchachia upazila in Bogra. It was 2011. From that year, Bulbuli Begum did not get any time to look back at the days of hardship and frustration. Instead, she started dreaming of good life that eventually became a reality. The housewife is now a successful entrepreneur, thanks to the One House One Farm Project.

Bulbuli Begum became a member of Kholash Gram Unnayan Samity of the project and borrowed Tk 10,000 from the samity to start a toy making business. Presently, she makes profits of Tk 7000-Tk 8,000 in every month from her home-based toy factory.

Like Bulbuli, thousands of poor people have been able to change their fortune with the help of this Project.

"The government is now planning to establish a total of one lakh Gram Unnayan Samities across the country by 2020 for providing all poor people a decent life", Director of the scheme Akbar Hossain said.

The project director said the poor people are included in the Gram Unnayan Samity after their proper identification. Each of the samities consists of 60 members - 40 females and 20 males. The members of the samity deposit Tk 200 a month each for building their own fund, while the government provides equal incentive as bonus against the savings of the members.

"We could support three crore people of 60 lakh families through the one lakh samities," he said, adding that the main philosophy of the project is to remove the shortage of capital by creating a permanent fund for the poor and generate employment through small savings instead of microcredit.

Launched in 2009 with a goal of poverty reduction by involving poor people of the country in the income-generating activities, the project so far brought over 1.50 crore beneficiaries under it support.

He said the samity exists at all wards of 4,550 unions of the country while 30 lakh poor families are directly involved in around 56,000 samities.

In the process for creating fund of poor people through constituting samities, Akbar said, the permanent fund of the members including bonus given by the government has stood at Tk 3,200 crore.