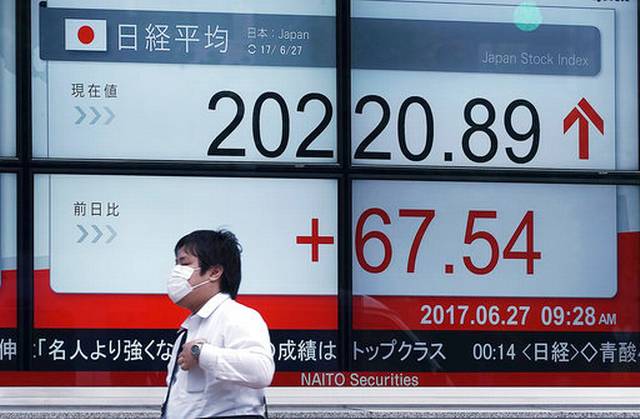 ANALYST'S TAKE: "A mixed U.S. session leaves Asia markets to fend for itself once again," said Jingyi Pan, a market strategist at IG in Singapore. "Asia Pacific shares which saw broad gains at the start of the week could find more disparate returns on the heels of a tech slide."

CENTRAL BANKERS: Investors will pay attention to upcoming remarks by central bankers around the world even as they do not expect major revelations on monetary policies. Mario Draghi, president of the European Central Bank, is scheduled to speak at the ECB forum in Sintra, Portugal later in the day. Federal Reserve Chair Janet Yellen is due to speak in London.

OIL: Benchmark U.S. crude rose 12 cents to $43.50 per barrel on electronic trading in New York Mercantile Exchange. The contract rose 37 cents, or 0.9 percent, to settle at $43.38 a barrel on Monday. Brent, the international standard, gained 14 cents to $46.18 per barrel in London.