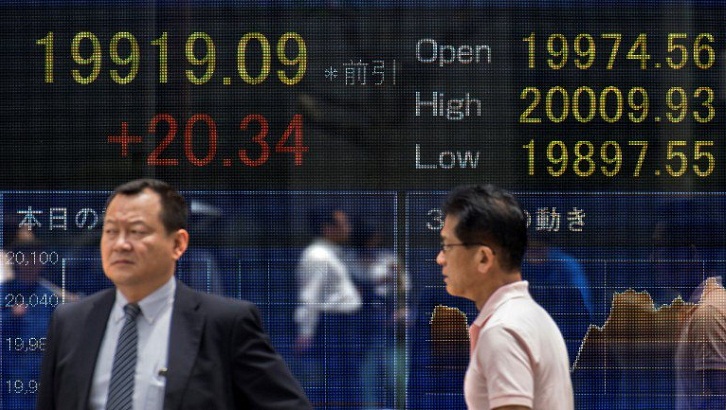 Energy firms rose in Asia on Monday as another hike in oil prices chipped away at last week's hefty losses, but investors are getting tetchy as Donald Trump struggle to pass his healthcare bill, raising concerns about his economic agenda.

Crude's gains extended into a third straight trading day after being pummelled to 10-month lows Wednesday on fears that OPEC and Russia's output cuts will not avoid another global supply glut due in part to rising US production.

The drop had led to a sell-off in regional energy firms but the slight recovery provided some relief Monday, with Tokyo-listed Inpex rallying almost one percent, while Woodside Petroleum in Sydney and CNOOC in Hong Kong also advanced.

Adding to the upward pressure for oil in the ongoing crisis in the Middle East, where a Saudi Arabia-led blockade of Qatar has fuelled concerns of possible conflict.

Doha rejected at the weekend a list of demands -- ostensibly aimed at fighting extremism and terrorism -- in return for an end to the nearly three-week-old diplomatic and trade row, which has reeled in regional powers Turkey and Iran.

"In characterising it as a family fight, as White House spokesman Sean Spicer appeared to do over the weekend, it's not taking sides or a leadership role. Which means it could easily kick off -- especially given Iran is the shadow issue," said Greg McKenna, chief market strategist at AxiTrader.

However, analysts warned the oil gains would likely be limited as US firms continue to bring more rigs online.

The company has been hammered and faces lawsuits as well as massive costs after deadly faults in its airbags triggered the auto industry's biggest ever safety recall.

Traders are also keeping an eye on Washington where Republicans look to be having trouble pushing through a controversial healthcare bill to overtake Obamacare.

Senate leaders last week unveiled a revamped health plan but so far have failed to garner enough support to pass with only Republican votes -- although the party has a majority in the Senate -- after a handful of GOP lawmakers revolted.

Failure to push through one of Trump's key policies, even with a majority in both houses of Congress, could throw a spanner in the works for his other goals, including tax reform and massive infrastructure spending.

"We'll see if it actually comes to the floor for a vote. But if it does not, or if it is defeated, the path to Trumponomics and the economic stimulus becomes so much harder," said McKenna.