47 killed in multiple blasts and firing in 3 Pakistani cities 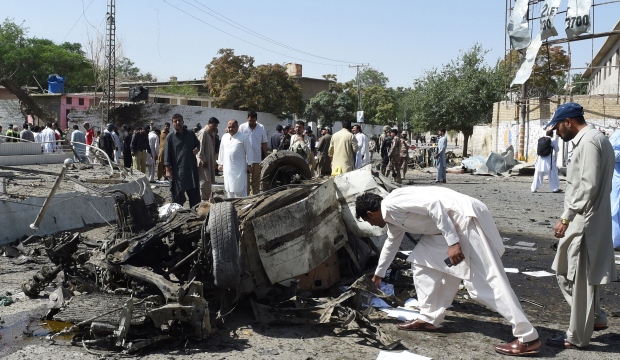 Twin blasts tore through a market crowded with Eid shoppers in a mainly Shia town, a suicide bomber blew up his explosives-laden car and militants opened fire on police in separate attacks in Pakistan's three major cities on Friday, killing 47 people and wounding 121 others.

The suicide bomber blew up his explosives-laden car near Inspector General of Police Ehsan Mehboob's office in Quetta, the capital of Balochistan province, killing at least 13 people, including seven policemen, and wounding 21 others.

The blast was claimed by both the local affiliate of the Islamic State terror group and by Jamaat-ul-Ahrar (JuA), a splinter group of the Tehrik-e-Taliban Pakistan.

Hours later, two back-to-back blasts tore through a market crowded with the people shopping for Eid in the Shia- dominated Parachinar city in the Kurram tribal region, killing at least 30 people, mostly Shias, and injuring 100 others.

The first blast occurred during rush hour in Turi Market, where a bus terminal is also located. The second blast took place as rescuers and bystanders rushed to aid those who had been hurt in the first explosion.

At least 30 people have been killed and 100 others injured in Parachinar, Dawn news reported.

Earlier, Medical Superintendent of the District General Hospital, Parachinar, Sabir Hussain, confirmed the death of at least 25 people and injuries to over 100 in the blasts. More than 20 of the injured were in critical condition.

In the evening, two armed men on a motorcycle, with their faces covered with helmets, opened fire on police officers at a roadside restaurant in Karachi and killed four of them.

An assistant sub-inspector was among those killed in the attack, said Superintendent of Police Asif Ahmad.

In Parachinar, officials said the blasts on the last Friday of the holy month of Ramazan targeted people shopping in the area and those heading out of the city ahead of Eid.

Pakistan Army contingents and FC personnel reached the site of the attack to aid in rescue efforts.

"Two Army aviation helicopters have taken off from Peshawar to Parachinar for the speedy evacuation of the injured to Peshawar," the army said in a statement.

"Rescue operation in progress," it added.

Army spokesman Major General Asif Ghafoor said that security has been tightened across the country.

"Special Intelligence-Based Operation (IBOs) and search operations (were) launched in coordination with intelligence and other Law Enforcement Agencies," he said.

On March 31, a car bomb blast near an Imambargah of Shia Muslims killed 23 people and injured 70 others in Parachinar.

In January, 25 people were killed and 87 others when a bomb tore through a crowded vegetable market in the same city.

Balochistan government spokesperson Anwarul Haq Kakar told Geo News that the suspected Quetta bomber tried to break a security perimetre to target the police offices but blew up after policemen standing guard attempted to stop him.

Of the injured, nine are said to be policemen.

DIG Quetta Abdul Razzaq Cheema, addressing the media, said they are examining CCTV footage to determine the details of the incident.

Officials said body parts of the suspected bomber, strewn across the site of the blast, were being collected along with other evidence for forensic examination.

An initial investigation report by Civil Defence Director Aslam Tareen revealed that 75 kilogrammes of explosives were used in the Quetta blast.

Footage of the incident showed two vehicles badly damaged in the explosion, while debris lay scattered on the street.

Officials said the explosion was loud enough to be heard from a distance and shattered windows of nearby buildings.

Earlier this year, on February 13, a blast took place near the Saryab Bridge in Quetta killing two personnel of the bomb disposal squad and leaving 11 injured.

Later in March, an explosion targeting a security forces convoy occurred on Saryab Road. Four people were injured including three Frontier Corps personnel and a passer-by.

In August, last year, a suicide bomber targeted the emergency services ward at Civil Hospital, following the death of the president of the Balochistan High Court Bar Association, killing at least 70 people and leaving many wounded.