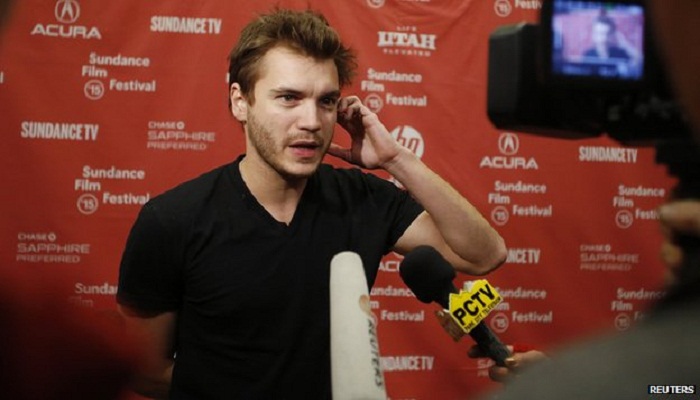 US actor Emile Hirsch has been charged with aggravated assault after allegedly choking a female film executive at last month's Sundance Film Festival.
The star, who is best known for his roles in Into the Wild and Milk, faces up to five years in jail if convicted.
According to court papers, he assaulted the woman at a nightclub in Park City, Utah, in the early hours of 25 January.
Prosecutors named the woman as Daniele Bernfeld, an executive for Insurge Pictures, part of Paramount Pictures.
Police were called to the club after she reported being assaulted.
Ms Bernfeld told police that Mr Hirsch approached her and asked her why she looked "so tough", according to charging documents.
He also told the executive she was a "rich kid who should not be at Sundance", the documents said.
Mr Hirsch is alleged to have initially grabbed Ms Bernfeld before she pushed him away. The actor was then said to have grabbed her from behind.
'Blacked out'
The charging documents said Mr Hirsch put her in a chokehold, pulled her across the table and landed on top of her on the floor, putting his hands around her throat.
The alleged victim said she felt as though "the front and back of her throat were touching", adding that she may have temporarily blacked out.
Two bystanders apparently pulled Mr Hirsch away. A witness has backed up Ms Bernfeld's version of events, according to court documents.
Mr Hirsch told police he did not know the woman but was having an argument with her. He said he had had three or four drinks, and a police officer told prosecutors his balance was impaired and his speech slurred.
The actor has also been charged with a misdemeanour count of intoxication.
His agent Brian Swardstrom and lawyer Robert Offer did not immediately comment. The actor is due to appear in court on 16 March.
Mr Hirsch is best known for his work with Sean Penn. He took the lead role in Penn's 2007 film Into the Wild and starred alongside him in Milk. He also played the leading man in Ang Lee's Taking Woodstock in 2009.
He was at Sundance for the premiere of the drama Ten Thousand Saints, in which he appears alongside Ethan Hawke and Asa Butterfield.