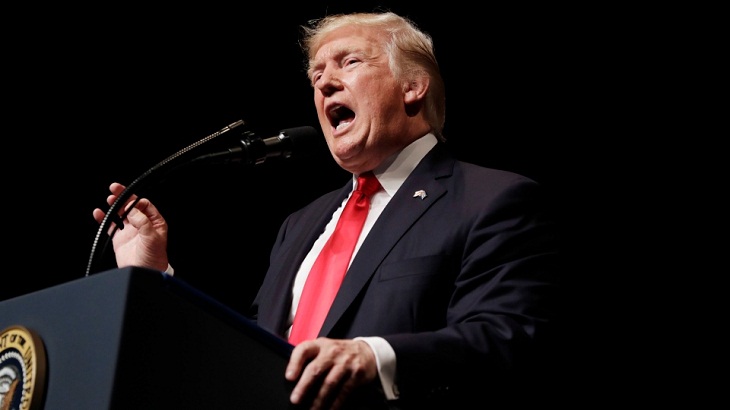 US president Donald Trump announced he is under investigation and appeared to attack a senior Department of Justice official Friday, as the federal investigation consuming his administration gathered pace.

As Bob Mueller, the special investigator now heading the FBI’s probe into allegations of Russian election meddling, filled out his legal team and prepared to begin interviews, Trump erupted furiously for a second consecutive day.

“I am being investigated for firing the FBI Director by the man who told me to fire the FBI Director! Witch Hunt” he tweeted from the White House shortly before leaving for Miami.

A source on Trump’s legal team claimed the president was referring to a Washington Post story “from the other night” rather than confirming he is being investigated.

The Washington Post was one of several media that revealed this week that Trump himself is being investigated on allegations of obstructing justice.

Inside the White House, a sense of foreboding has taken hold on even the most junior staff and up to the Oval Office, as news emerged that Vice President Mike Pence has hired a high-powered outside counsel to represent him.

An aide on Thursday said Pence had hired Richard Cullen who litigated the 1980s Iran-Contra scandal, the Watergate affair and the 2000 vote recount in Florida.

The vice-president, who was also in Miami, described his move to hire an outside lawyer as “very routine.”

Special counsel Mueller-a respected former FBI director-was also bringing in legal firepower to investigate whether there was collusion between Trump’s team and Russia to fix the 2016 election or an attempted cover-up.

Peter Carr, a spokesman for Mueller told AFP he now has “13 attorneys on board, with several more in the pipeline.”

That news appears to have infuriated the president, who also lashed out at the media on a day that aides hoped would be focused on his decision to undo some of Barack Obama’s detente with Cuba.

“After 7 months of investigations & committee hearings about my ‘collusion with the Russians,’ nobody has been able to show any proof. Sad!” Trump tweeted.

“The Fake News Media hates when I use what has turned out to be my very powerful Social Media - over 100 million people! I can go around them.”

On Thursday Trump derided a “witch hunt” against him, led by some “very bad” people.

Trump’s young presidency has been battered by allegations-under investigation both by Congress and the FBI-that Russia interfered to sway the 2016 election in his favor, in possible collusion with Trump’s campaign team.

The president has long vehemently denied any collusion with Moscow.

The new allegations against Trump center on his own admission that he fired Comey because of the Russia investigation, and suggestions he asked several top intelligence officials for their help altering the inquiry’s direction.

The widened Russia probe could have far-reaching repercussions for Trump’s presidency, transforming his closest aides into witnesses and sucking yet more political oxygen out of the West Wing.

As the legal rope has tightened, his allies have gone on the offensive, questioning Mueller’s credibility. Allies have even floated the idea that Mueller may be fired.