Valerie Taylor: A Saint in Our Midst 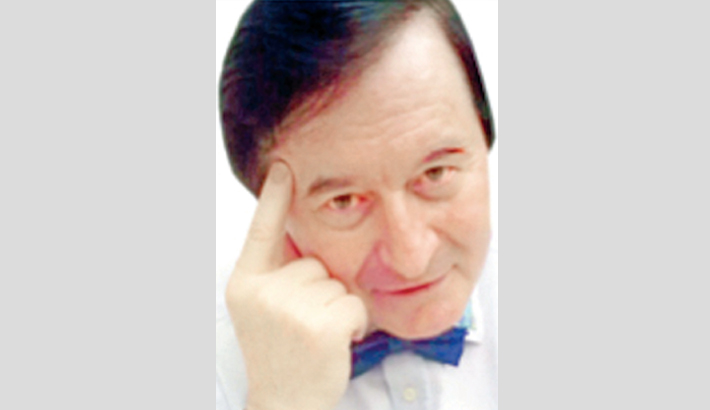 I do not subscribe to the norm of showering people with pleasantries, praise, love, and admiration after they have died. I believe admiration and due respect best serve the living and may even help to uplift their spirit and offer encouragement in one of their down moments (and we all have those) by telling them they are loved, admired, and their great God-inspired work is truly appreciated.

One such person deserving the nation’s unequivocal appreciation, help, support, and eternal gratitude is Valerie Taylor, OBE – one of the greatest humanitarians of the 21st century.

She holds only the most humble conception of her own achievements, but is a lighthouse of hope for the disabled throughout Bangladesh.

I speak her name in awe and solemn reverence.

Valerie Taylor, who was born on February 8, 1944 in Buckinghamshire, UK, is an Ambassador of Heaven itself. She’s a saint in our midst, but I hope she won’t collect the accolade for many decades to come.

Valerie is the best example I know of perfection in human character. The sort of person we would all become if not for our myriad of faults. She is someone who oozes so much benevolence, feeling, love and compassion for her fellow humans – especially the disabled – it sometimes fogs her glasses. The lady (and she is a lady) is a waterfall of human kindness in stature comparable to Victoria Falls.


Valery is a young 74 year-old physiotherapist by profession. She’s also a philanthropist, an inspiration to millions and a ‘mother’ to thousands, although none are biologically her own. Never married, she adopted two disabled Bangladeshi girls — Poppy and Joyti — who are the love of her life and her family.

In 1998, she was granted Bangladeshi citizenship, and in 2004, the Government of Bangladesh honoured her with the Bangladesh Independence Day award for her social work.

Not what God had in mind

The story of Valerie Ann Taylor not only inspires all those who tirelessly care for the distressed and the disabled, but also offers a lesson to all and that is to never under-estimate the power of an individual.

When the young physiotherapist first arrived in Bangladesh as a VSO volunteer, she only intended to stay for 15 months…. perform God’s work… have a bit of a holiday… see a bit of Bangladesh and then return to Buckinghamshire to re-join her friends in a cafe and chat about her experiences.

But that wasn’t what God had in mind.

"I fell instantly in love with the country,” she told the BBC, in softly spoken tones, “and over four decades later I find I'm still here.”

When the pretty young spinster witnessed the horrific plight of disabled people in what was then known as East Pakistan, to have ignored and returned to her ‘comfort zone’ life in the UK would have troubled her conscience never ending.

After years of research and finding no organization or institution in Bangladesh that provided adequate care to people with spinal injuries, the tally of her sleepless night rose dramatically. In 1979, after 10 years of sheer persistence, and refusing to take ‘no’ for an answer, Valerie (then 35) opened the Centre for the Rehabilitation of the Paralysed (CRP) in Savar, near Dhaka. It’s her dream come true and a blessing from God for all its patients. Valerie and her team are caring, considerate, compassionate and understanding to their special and individual needs.

CRP opened with just four patients, but has since grown to treat hundreds of thousands.

Now the CRP facilities are huge. There is a 100-bed hospital for spinal injuries, an operating theatre, and workshops where patients learn and are paid to make export quality wheelchairs and such. Other services include vocational re-training for disabled women and girls, medical, therapy and diagnostic services and training of health professionals up to BSc., in affiliation with renowned institutions including Dhaka University.

They also work with children with Cerebral Palsy and teach parents how to cope with the condition.

Valerie Taylor, rightfully so, has been decorated with numerous awards including the O.B.E. (Order of the British Empire for her outstanding efforts providing holistic treatment for the paralysed) and also the "Shadhinota Dibosh Podok", the highest civilian award of Bangladesh.

She refuses to accept honours exclusively, but willingly share them with her ‘family members’ i.e., all those people who contributed to her work in one form or another, including donors. 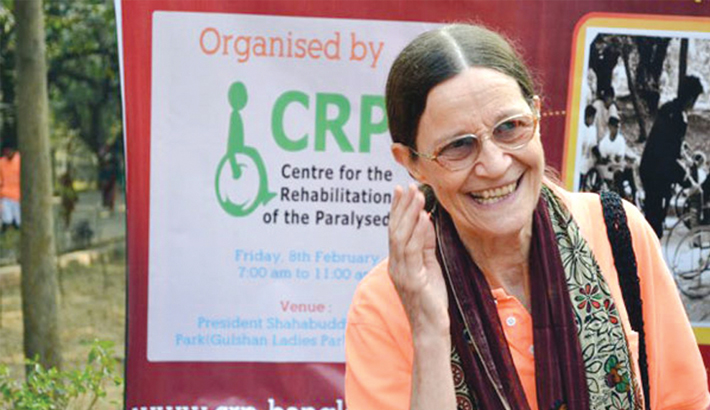 "CRP is what it is thanks to hundreds, maybe thousands of people who've played their part. Many come and give their time as volunteers and having seen what we do, they often return home, and raise money in their own country for our work to continue," she said.

In December 2009 I was honoured to share a platform as guest speaker with Valerie. KidZcare School had organised a workshop for the parents of children with special needs.

During my delivery, I paid heart-felt homage to Valerie and termed her the ‘Mother Teresa of Bangladesh’. Her pale Buckhamshire cheeks blushed bright red with embarrassment, God love her.

Later when interviewed by a national British newspaper she admitted feeling humbled and awkward at the time and told the reporter: "I'm just very simple, plain old Valerie Taylor.”

I doubt if you could meet a person who is more humble, kind, more caring, more compassionate and more down to earth as she.

Her ‘calling’ from God had taken her into unchartered territories. Before her arrival, physically handicapped people in Bangladesh were looked-down upon, frowned upon and lacked due respect.

“Disabilities are not punishments to the individual from Allah, but sometimes they are tests by Allah to see how people treat or mistreat a fellow human,” she said. The noble Valerie has dedicated her life to serving people with disabilities in Bangladesh and easing their sufferings.

She was forced to leave Bangladesh during the Liberation War in 1971 and returned to England in 1973 with the goal of raising funds to build a rehabilitation centre for the paralyzed.

In 1975, she returned to Dhaka with insufficient money to actually set-up the rehabilitation centre, but for the first time in her life, she had a dream, purpose, and a solid reason for jumping out of bed each morning and she knew exactly what she wanted to achieve. Hope coupled to unshakeable determination and powerful mysterious forces propelled her to keep working on transforming her dream into reality.

Given birth in two cement storerooms

Four years on, in 1979, CRP began its historic journey from two cement storerooms in the grounds of the Shaheed Suhrawardy Medical College Hospital in Dhaka. Later in 1990, she managed to set up a permanent structure and moved to Savar. Fund-raising for the project, however, was no picnic.

“We faced a lot of challenges, especially raising funds for permanent land and setting up buildings. Some of my well wishers and I did this step by step, slowly by slowly, but we managed to get there in the end. Now the challenge is to keep afloat,” she said.

I got away once comparing Valerie to Mother Teresa of Calcutta. Since that day in 2009, the renowned nun and champion of the poor, has been canonized a saint.

Being an ever so humble soul whose two feet are firmly anchored in reality and who shuns the limelight, Valerie would never agree with me describing her as a living saint, but as William Shakespeare said: "A rose by any other name would smell as sweet".

To learn more about the work of CRP or to make a donation, visithttp://www.crp-bangladesh.org orwww.valerietaylortrust.org.

Sir Frank Peters is a former newspaper and magazine publisher and editor, a humanitarian, a royal Goodwill Ambassador, an ardent admirer of Valerie Taylor and the noble work of CRP.