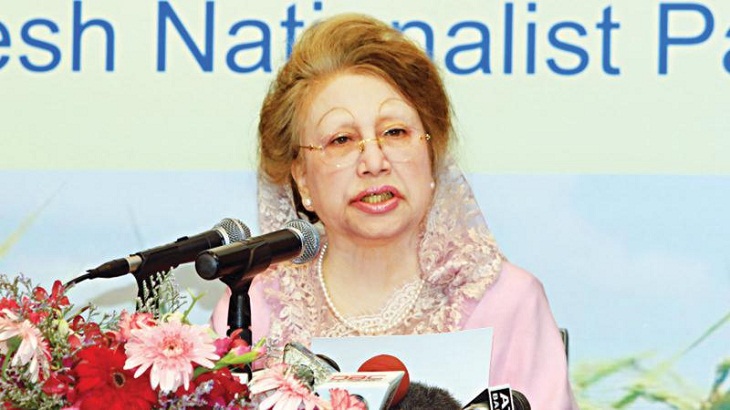 Begum Khaleda Zia, the all powerful Chairperson of the Bangladesh Nationalist Party-BNP  announced her party’s ‘Vision-2030’ in a city hotel on Wednesday amidst strong presence of her party policy makers, journalists, BNP oriented civil society members and mid ranking diplomats from few countries. According to newspaper reports Begum Zia’s ‘Vision-2030’ document  took one year in the making and the civil society members loyal to her put the document together which contained 37 issues broken down into 256 sub-clauses. It took more than two hours for Begum Zia to read it to the attending audience and most of the TV channel broadcast live the entire event. Excepting the budget speech of the Finance Minister in the Parliament it is not usual for anyone to read out a document for two hours in a public forum. Most of the people including journalists that I had chance to talk to told that they lost patience after fifteen to twenty minutes. As the document was distributed amongst those present listening to the monologue was useless, many thought. From the previous experience the journalist also knew that there will be no question and answer session so the time was better spent by many taking a cat nap. However, Begum Zia must be congratulated for the stamina she showed reading the text for two hours. ‘Vision-2030’ of BNP is thought to be a prelude of their election manifest scheduled to be held later in 2018 or early 2019. She reminded that her ‘Vision-2030’ is the detailed version of the speech she delivered in the BNP’s party Council held on March 19, 2016. That night some of the BNP policymakers and think tanks appeared in TV Talk Shows and it seemed that many of them had no idea what was in that document. To have a vision is good but to implement that vision a visionary leader is necessary. Unfortunately BNP does not seem to have any such visionary leader at the moment. If they had one, they would have participated in the election of 2014 instead of declaring a war against the people causing immense loss of lives and public property.

Begum Zia admitted that her announced ‘Vision-2030’ will be difficult to achieve but is not impossible. Her vision is full of ‘ifs’ and ‘buts’. First her party will have to win the next parliament election with two third majority as she promised many amendments to the constitution.  As her vision practically did not leave out anything under the sun, for things to happen BNP must be in power for at least next thirty years if not more. It has been out power since 2007; the party has faded into oblivion to a great extent and will have to struggle with the dark legacy of the past perhaps for next couple of decades. Begum Zia started her ‘Vision-2030’ with the promise to ‘return the ownership of the state’ to the people with the promise of introducing liberal democracy. She perhaps forgot that it was her late husband and the founder of BNP that killed democracy after the brutal assassination of Bangabandhu Sk.  Mujibur Rahman on August 15, 1975 by some junior officers in the army about which Zia had earlier information and did nothing to stop the mayhem. By early November  of 1975 Zia was running the country with a night time curfew, while holding the office of Army Chief held a ‘Yes’ ‘No’ farcical referendum to legitimise his usurping the state power. Zia’s rise to politics was profusely helped by Moshiur Rahman Jadu Mia, one time General Secretary of Maulana Bhashani’s NAP. According to an exclusive interview given by Moklesur Rahman Sidhu Miah, elder brother of Jadu Mia, published in the quarterly Protichinta (October-December 2014) Zia after becoming the Chief  Martial Law Administrator requested  Jadu Miah to make him a politician. This interview was taken by no less than persons like Sardar Fazlul Karim and Mustafa Nurul Islam. According to Sidhu Miah his brother told that Zia wanted to change or replace the 1972 Constitution as it did not endorse absolute power either to the President or the Prime Minister. He wanted to change the 1972 Constitution and make the office of the President all powerful. Zia collected constitutions of other countries and while these were being reviewed suddenly he announced the so called ‘Yes’ ‘No’ farcical referendum where the total cast was shown as 99 per cent of the registered voters.  He formed his political party with the help of his cohort army intelligence and some self seeking political leaders and after retiring from the military promoted himself to the rank of Lt. General with a backdated gazette. So much for commitment to democracy of BNP. Now when the founder of BNP harboured such idea about power sharing, how people can believe when Begum Zia begins her ‘Vision-2030’ by promising that if her party is voted to power she will change the Constitution to make an equitable share of power between the office of the President and the Prime Minister. The only explanation for this could be if her party is voted to power she might become the President and her exiled and absconding son Tarique Rahman may become the Prime Minister.

‘Vision-2030’ promises the rule of law, good governance, curbing militancy, terrorism and communalism.  A former Prime Minister’s memory should not be so short to forget the mayhem her party leaders and workers committed in South Bengal on religious minorities after the election of 2001, the grenade attack on Sk. Hasina’s public meeting on August 21, 2004 to kill her, ending up killing 23 of Awami League workers and leaders including Ivy Rahman, wife of late President Zillur Rahman. Mufti Hannan one of the leading planners of the August 21 attack confessed before the court that before the deadly operation they had series of meeting with Tareque Rahman and few others at Hawa Bhavan, his safe house of corruption and all misdeeds. The mastermind of August 21 grenade attack Maulana Tajuddin was safely escorted to Pakistan by members of army intelligence on the order of Begum Zia and her son. Begum Zia announced her plan to modernise the armed forces. She perhaps is not aware that Bangladesh’s armed forces today is one of the most modern armed force in the region capable of protecting the sovereignty and integrity of the country. How can the Begum forget that it was she who instigated the armed forces before the January 5, 2014 election to rebel against the Sk. Hasina led government? ‘Vision-2030’ also promises not to allow Bangladesh’s territory to create unrest in another country. Good enough. But what about providing safe haven to the insurgents of North East India when she ran the government! People’s memory is not that short to forget the interception of ten truck loads of modern weapons in Chittagong destined for the insurgents of North East India. During the investigation one of the accused confessed in the court that the then Prime Minister was well aware of this incident in advance. Lufuzzaman Babar, Begum Zia’s State Minister for Home and one of the accused in this arms haul case has already been sentenced to death for his involvement in this gun running business. One of Begum Zia’s important minister announced in the parliament during her tenure as the Prime Minster that it is a moral duty of Bangladesh to support these insurgents as they are fighting for their independence. Begum Zia announced her commitment towards the spirit of Liberation War. One may ask how was that people like Jamaat’s Matiur Rahman Nizami, Ali Ahsan Mohamed Mujahid the two front ranking war criminals of 1971 found their berth in her cabinet in 2001.

Begum Zia emphasises that if her party is voted to power they will improve the infrastructure of country including increasing power generation capacity to 35 thousand MW and making deep sea port in Chittagong and tunnel under Karnafully River in Chittagong and under mighty rivers like Padma, Jamuna and Meghna. Perhaps no one informed her that construction of a tunnel under Karnafully has already begun and whether constructing tunnels under other rives are technically and economically feasible are matters to be studied. When BNP formed government in 2001 it inherited a power generation capacity of 4,000 MW plus left by Sk. Hasina’s government. By the end of Begum Zia government’s term in 2006 the capacity declined to 3,000 MW. Today Bangladeshis capable of producing 11,000 MW of electricity and new capacity is being added regularly from internal and external sources. The government is working on establishing coal powered power generation plant in Matarbari in the Bay of Bengal and Banshkhali in Chittagong, establishing a deep sea port in Sonadia Island off Cox’s Bazaar and the prestigious Roop Pur Nuclear Power plant.  Chittagong port today has more cargo handling capacity than any time in its history.  Begum Zia perhaps is not aware of the developments that are taking place in the communication sector. Many highways, especially Dhaka-Chittagong have been converted into four lanes and work is going on to further expand them to six to eight lane.  The laying of Dhaka-Chittagong double line railway tack is near complete. Any one visiting Dhaka does not fail to notice the networks of flyovers in the Capital. The ongoing works of constructing Metro Rail system and elevated express way are very much visible in and around Dhaka. Begum Zia talks about increasing the speed of internet by increasing the capacity of bandwidth. How can she not know that Bangladesh is preparing itself to launch its own communication satellite in a year’s time? An important part of her vision was to increase of food production. When BNP left government the country produced 2.89 million metric tons of food. Bangladesh currently produces on an average to 4 million metric tons and is the fourth largest rice producing country in the world.

It is good for a political party to have a vision but more important is to have one that is based on facts and to be realistic. In the absence of a visionary leader to materialise the vision be it ‘Vision-2030’ of BNP, the vision document will just gather dust in someone’s bookshelf or finds its place in a trash can.