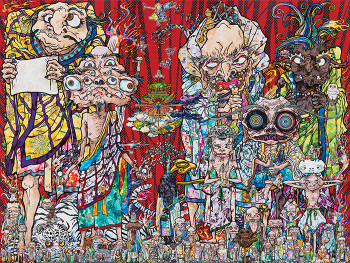 Aptly titled “In the Land of the Dead, Stepping on the Tail of a Rainbow,” Takashi Murakami’sfirst show in New York in five years was an absolute stunner, venturesome and dark.
Murakami understands that if you’re going to spend serious cash making a show, you may as well go all the way. He opened with a 56-ton, 21-foot-tall replica of a Zen Buddhist sacred gate (complete with soaring wooden columns and a stone base), which gave way to a pair of 14-foot-tall karajishi, the lions that protect temples. They are devil-like and monstrous, equal parts mythical deities and ferocious action figures. They hold huge clubs, hungry for violence.
Now comfortably mid-career, Murakami, 53, has always worked best on a grand scale, and a suite of relatively humble tondos (they’re only five feet across) adorned with flowers are handsome, but seem hollow—mere decoration. His large paintings and sculptures, though, are as immaculate, luxurious, and inventive—gold leaf, platinum leaf, never a stroke visible—as anything the artist’s large team of artisans has ever produced, and the subjects are even more manic and unwieldy than those of the past. The worlds they inhabit are coming undone, and the cartoon and human figures within them look deranged. Skulls are everywhere.
Murakami has also escalated the ongoing arms race among artists making gargantuan shiny sculptures—Jeff Koons currently leads—with a formidable 14-foot totem of stacked cartoon monsters, leafed in gold and seemingly on the verge of tipping over.
In a comparatively modest sculpture (it was platinum-plated, but just six and a half feet tall), titledInvoking the Vitality of a Universe Beyond Imagination (2014), the artist poses himself with mouth agape, frightened. He’s balancing two heads on top of his own—one is deflated, the other is rabid-looking, with sharp teeth pointing in every direction. He is keeping it together, but just barely.
A version of this story originally appeared in the February 2015 issue of ARTnews on page 80 .