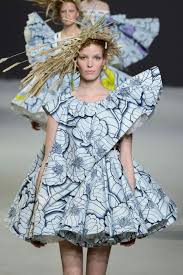 We take a tour in the lustrous runway in Paris. Since their return to haute couture, the dutch designers Viktor Horsting and Rolf Snoeren have given fashionistas collections crafted out of red carpet, pink plastic and black pebble-esque fabric. To add to their list of eccentric couture themes, the duo came up with a color by numbers blooming flower garden this season.

In the twenty looks the designers produced, they increasingly added color to a base print of an ink blue flower outline. As the color was increased on each outfit, so too was its asymmetrical volume. Those who recall the pairs’ tulle topiary ready-to-wear show could see this couture collection as a high-end extrapolation of that same concept.

As unwieldy as each dress might have been, it was perhaps the straw hats, which came embellished with giant stalks of wheat and sometimes veiled in outsized floral lace or whorls of paper flowers, that looked like the most difficult thing for the models to deal with on the catwalk. In some cases the OTT headgear was so enormous the girls had to turn to their sides just to get past each other on what was already a rather wide runway. The only truly practical thing about this entire show was the thick-soled flip-flops trimmed in the same floral print as the dresses.

But Viktor & Rolf can get away with such theatrics, as these sorts of sartorial art house performance pieces are what built their reputation in the first place. And if one were to deflate a few of the designs, the ones without the appliqué fabric stalks covered in giant flowers, there might just be a viable future yet for one or two of these hot house blooms