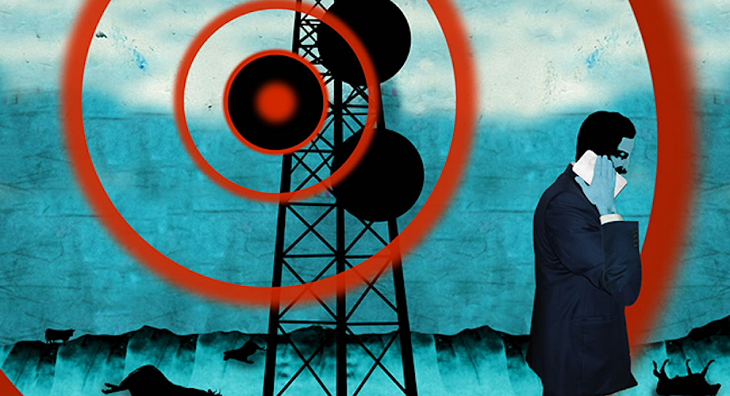 Mobile Phone usage has spread rapidly around the world demanding better coverage and a large number of mobile base towers. People use mobile phones for the purpose of communication but few are concerned about their health implications and environment safety measures.

The effects of Mobile Tower Radiation are seen in many countries. In Bangladesh, the use of mobile phones has increased over the past few years. At the same time there has been a significant increase in the installation of mobile base stations, accompanied by concern for possible environmental and health impacts associated with exposure to electromagnetic waves spreading from base stations. Currently, there are nearly 21,600 cell phone towers in Bangladesh to meet the communication demand. In Dhaka city cell towers are mushrooming all over the area. Due to great demand of mobile in Bangladesh various mobile operators have built up their tower and networking system through antenna all over the country, even over the roof of houses or institutions without considering the minimum distance from peoples’ living area.

Looking at the above evidence, we can easily understand the radiation status of Bangladesh. In this context, excessive radiation of cell towers affects the birds, animals, plants, environment and public health. Nowadays it is tough to see a bee, sparrow, pigeon or any bird flying and staying near the cell tower. They absorb more radiation as the surface area of these animals is larger than their weight in comparison to the human body. Telecommunication specialist Dr. Satyaprashad Majumder says, radiation emanating from a tower per square meter ranges from 17, 100 micro-watts to 72, 000 micro watts. The human body can tolerate radiation up to 100, 000 micro-watts but birds and flying animals cannot tolerate more than 40,000 micro-watts. Excessive radiation absorption changes the life-cycle of bees that is called ‘Colony Collapse Disorder’ where bees cannot find their way back to the hive and also interrupts the intercellular communication within individual bees. When birds are exposed to weak electromagnetic fields they become disorientated and begin to fly in all directions which undermine their navigation abilities. A large number of birds like pigeons, sparrows and swans are getting lost due to interference from the new "unseen enemy". A stable house sparrow population indicates a healthy ecosystem for human beings in terms of air and water quality, vegetation and other parameters of habitat quality. Whereas, a declining population of the bird provides a warning that the urban ecosystem is experiencing some environmental changes unsuitable for human health in coming future. It has been proven that cows grazing near cell towers are more likely to experience spontaneous abortions, birth deformities, and behavioural problems. Exposing dairy cows to magnetic fields can result in reduction in milk yield, milk composition and fertility problems. Besides, impaired immune systems of sheep, reproductive and developmental problems of dogs and cats, anxiety and alarm in rabbits, frequent death of domestic animals near mobile towers has been observed. Apart from bees, birds and animals, electromagnetic radiation emanating from cell towers can also affect vegetables, crops and plants. Studies show definitive clues that cell phone tower radiation can choke seeds, inhibit germination and root growth, thereby affecting the overall growth of agricultural crops and plants. Trees located inside the main beam have a much lower fruit yield, dried tops and slow growth. Presently, excessive radiation is hampering coconut and betel nut production in Barisal and Khulna division.  Also electromagnetic radiation generates heat which may kill micro-organisms present in the soil nearby. This in turn harms those organisms which feed on them and disturbs the ecological cycle.

Through my research and from face to face interviews with the people of Dhaka city, I have been explored various problems among the people. The tower antennas may have electrical down-tilt so that signals are directed towards ground level. Large numbers of these antennas are mounted near schools, hospitals, residential and office buildings to provide good mobile phone coverage to the users. These cell towers transmit radiation continuously. So people living within 100 meters from towers receive 10,000 to 10,000, 000 times stronger than received from mobile communication. Mobile phone operators have erected towers and networking system at highly populated zones. As a result people are experiencing eye cataract, body tissue damage, heart diseases, highpertension, headaches, sleeping disturbances, dizziness, anxiety, depression, changes in reproductive system, genetic code, generalised burning sensations, episodes of shaking, fit, palpitations, diarrhoea, skin rashes, changes in libido, fatigue, irritability, memory loss and heaviness of the chest.

I think radiation of cell-phone tower is worse for the body than smoking cigarettes as one cannot see or smell it and its effect on human health and environment. Even if people are aware of the radiation hazard, they may not have the alternative to move away from a tower that is installed near their home or working place or school or university or park. In addition to the continuous radiation from cell towers, there is radiation from cell phones, wireless phones, computers, laptops, TV towers, FM towers etc. We are exposed to all this radiation that is inimical.

If mobile phone companies accept that radiation causes serious health problems will they encourage people to stop using cell phones? I don’t think so because mobile technology has so many advantages and there are billions of dollars at stake. So, some primary steps can be taken: guidelines of WHO can be applied for erecting tower and transmission frequency; towers both ground based and roof based should not be installed within 50 metres from schools or hospitals—new towers should be located 50 metres away from school and hospital buildings, existing tower should be relocated, installation of towers in the residential areas must be avoided, 24 hours monitoring of cell tower radiation must be done at various places, antennas should be mounted on or above 30 meters from ground, warning sign must be installed near cell towers to warn people about the danger of radiation, hotline or e-mail must be hanged where people can call or write their problems regarding radiation.

After all the researchers, technical experts and entrepreneurs will have to come up with solutions, which may be expensive but will be better than the risks faced by people, animals, birds and the environment today.

The writer is an Environment