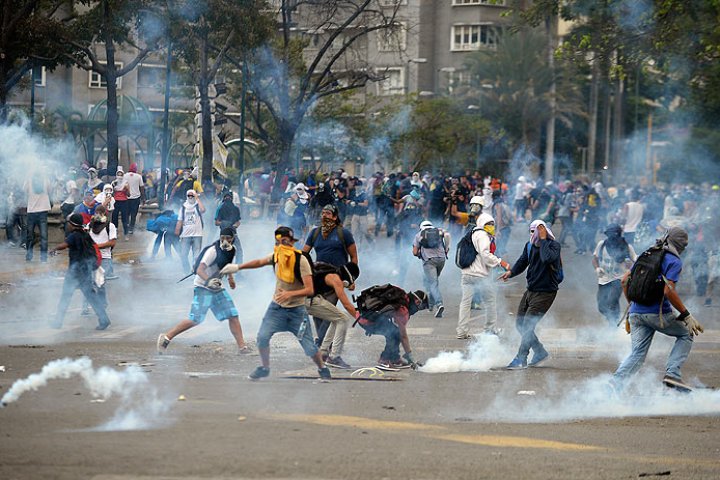 The death toll in three weeks of violence at anti-government protests in Venezuela jumped to 20 people Friday after a night of clashes and pillaging left 12 people dead in Caracas.

"It was like a war," said 33-year-old construction worker Carlos Yanez, a resident of the southwestern district of El Valle.

"The police were firing tear gas, armed civilians were shooting guns at buildings. My family and I threw ourselves to the floor. It was horrible," he told AFP.

Eleven people were killed in the neighborhood, according to officials. Eight of them were reportedly electrocuted while trying to loot a bakery amid the chaos. The rest were shot.

At nightfall on Friday, more protests and pockets of unrest were reported in eastern Caracas, and in Macuto in the neighboring state of Vargas. There was a heavy security presence in the city.

The opposition accuses the government of sending gangs of armed thugs to attack them.

Videos shot by El Valle residents on Thursday night showed people throwing bottles and other objects out their windows at the gunmen in the streets below, shouting "Murderers!"

At one point, street protesters hurling Molotov cocktails managed to set fire to one of the armored police trucks firing tear gas at them, lighting up the night sky.

Fifty-four people, including newborn babies, were evacuated from a maternity hospital in the neighborhood.

There were conflicting explanations about the reason.

The government said "armed gangs hired by the opposition" had attacked the hospital. The opposition rejected the allegation, saying the children had to be evacuated because of tear gas fired by Maduro's "dictatorship."

The hospital's director, Rosalinda Prieto, told AFP the evacuation was prompted by the stench of burning trash set on fire by protesters.

A man was shot dead in protests in the eastern neighborhood of Petare, the local mayor said. Prosecutors said they had opened an investigation.

Opposition leaders have called new protests for Saturday and Monday.

On Saturday, they plan to march in silence to the Catholic Church's episcopal seats nationwide. They plan to erect roadblocks on Monday to grind the country to a halt.

Protesters blame Maduro -- heir of the leftist "Bolivarian revolution" launched by the late Hugo Chavez in 1999 -- for an economic crisis marked by severe shortages of food, medicine and basic goods.

Maduro says the protests against him are part of a US-backed coup plot.

On Thursday, he said the opposition had agreed to new talks. But his opponents denied the claim, saying the only way forward was to call elections.

Pressure on Maduro has been mounting since 2014, as falling prices for Venezuela's crucial oil exports have sent the once-booming economy into a tailspin.

The crisis escalated on March 30, when the Supreme Court moved to seize the powers of the legislature, the only lever of state authority not controlled by Maduro and his allies.

The court partly backtracked after an international outcry, but tension only increased when the authorities slapped a political ban on Capriles two weeks ago.

According to pollster Venebarometro, seven in 10 Venezuelans disapprove of Maduro, whose term does not end until 2019.