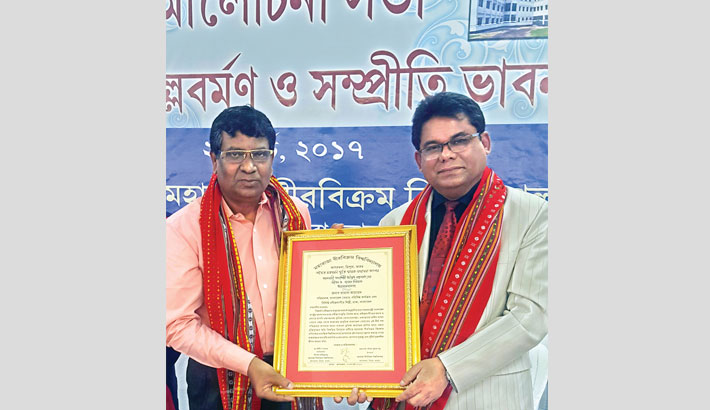 Maharaja Birbikram  University, is one of the leading public universities of Tripura honoured  Kamal Ahmed towards his contribution on patronizing Rabindra culture and playing vital role  in the journey  of  “Swadhin Bangla Betar Kendro” to Modern Radio.

Invited by the High Commission of Bangladesh Kamal Ahmed attended the programmes of Independence and National Day on 26th march and delivered his lecture on our great war of  liberation highlighting  the objectivity and  true history of the war.  He also performed at the High Commission.

Gautam Kumar Basu, Vice Canceller of the University gave him the Award. In his speech the vice chancellor said, it is really a great pride to honour a person of merit. Kamal Ahmed in his hurtful manner thanks the University authorities and said the Award is a great achievement for the whole of the Nation.

At the end of the program, Maharaja Birbikram College authority invited Kamal Ahmed to perform at the College on March 28t.  Members of the College governing body, teachers and students were present on the occasion.