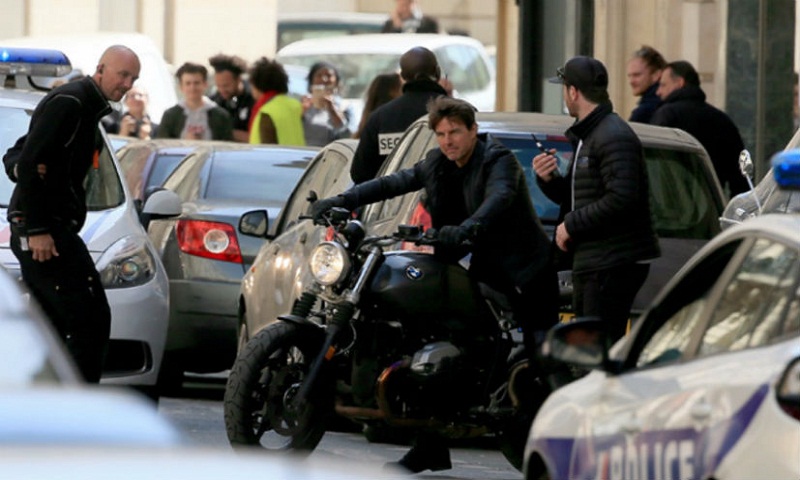 Shooting for the sixth instalment of the hugely popular action flick series Mission Impossible is underway in Paris and this one promises some thrilling motorcycle and car chases. Tom Cruise has been spotted riding a BMW R Nine T around the streets of Paris as well as an old BMW sedan. BMW's association with the 'Mission Impossible' movies dates back to 2011, but from the images it looks like this is the first time the BMW logo is shown clearly. Cruise also drives an old BMW car in one of the chase sequences in the movie on the streets of Paris.

The latest movie in the 'Mission Impossible' series will be released in July 2018, and with shooting currently underway, and more importantly, with these chase sequences, it certainly will appeal to fans of the MI series. Latest pictures of the film's shooting in Paris show Tom Cruise riding the R Nine T and even crashing the bike into a car. Cruise is known for doing his own stunts and riding the cars and bikes in the chase sequences. While details of the new MI6 movie remain unknown, some reports indicate that Tom Cruise will be performing the biggest stunt seen to date in his career.

The 54-year-old actor did the first 'Mission Impossible' movie 21 years ago, but he still looks in very good shape and according to reports, he has been training for over a year for the new movie. The car sequence also has actor Sean Harris riding shotgun in a strait jacket. The 'Top Gun' star will once again play the character of Ethan Hunt in the newest instalment. The movie also stars Alec Baldwin, Hernry Cavill, Simon Pegg and Jeremy Renner.

BMW was announced as the official automotive partner for the Mission Impossible movie series in 2015, where Tom Cruise drives a BMW M3 as well as a BMW Motorrad S 1000 RR superbike in 'Mission Impossible: Rogue Nation'. Earlier, in 2011 too, BMW partnered with Paramount Pictures for 'Mission Impossible: Ghost Protocol'. BMW's partnership not only involves supplying cars and bikes for the popular action movie series, but also technical support to modify them for stunt work. BMW debuted its i8 hybrid supercar in 'Ghost Protocol' and introduced its new 7 Series flagship in 'Rogue Nation'.