US unemployment rate near 10-year low 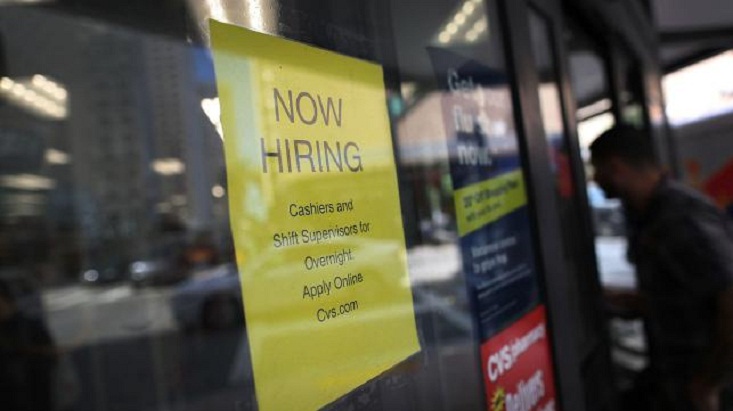 The US unemployment rate fell in March to 4.5 percent, its lowest level in nearly 10 years, but job creation tumbled unexpectedly, underscoring the challenges President Donald Trump faces to fulfill his 25-million-job pledge.

Central bank policymakers have been split over the amount of slack in labor markets and the dangers of inflation.

The March data could support the views of some Federal Reserve members who say the United States is at or near full employment.

The monthly job creation figure was nevertheless the weakest since May 2016 and blunted the surging numbers seen in January and February, when unseasonably warm weather helped push job creation well above the 200,000 mark.

Rob Martin of Barclays called the March result “a weak report with no silver linings in the details.”

Analysts had expected a far smaller dip in March job creation to 180,000 net new positions, on the back of the public sector hiring freeze put in place by the Trump government and a powerful storm that hit the US northeast last month.

Having campaigned on an “America First” agenda of economic nationalism and revival of manufacturing, Trump has pledged to create 25 million new jobs over 10 years and return the US to annual growth of as much as four percent-goals economists say are unrealistic.

With March’s result, the monthly average of jobs created for the first quarter fell to 178,000.

Ian Shepherdson of Pantheon Macroeconomics said that Fed policymakers were likely to expect a rebound in April but that the unemployment rate, now below even the central bank’s fourth-quarter forecast, was another matter.

“It shows no sign of bottoming,” he wrote in a client note.

“For the Fed, the unemployment rate is the ultimate arbiter of the tightness of the labor market, and the prospect of the rate continuing to fall towards four percent will be very disconcerting.”

Over the past 12 months, the number of long-term unemployed, or those without work for more than 26 weeks, has fallen by 526,000. In the same period, the number of people working part-time but who wanted full-time work also fell, by 567,000.

Elise Gould of the Economic Policy Institute said however that a 4.5 percent jobless rate was no guarantee the United States had actually reached full employment.

“Remember that the economy sat at roughly 4.0 percent for two solid years in 1999 and 2000 without sparking inflationary pressure,” she wrote in a statement.

Fed forecasts say that to stave off mounting inflation, the central bank expects to raise its benchmark interest rates twice more this year after hiking twice since December, ending the decade-long post-crisis policy of easy money.

The Fed also plans later this year to begin unwinding its $4.5 trillion holdings in Treasury bills and mortgage-backed securities, a measure taken during the financial crisis to boost growth. Reversing this policy could have the effect of additional rate hikes.

Financial services are up by 178,000 positions for the year, boosted by the hot housing market. The retail trade, contracting in the throes of a long decline in foot traffic and sales, lost 30,000 positions.

Wall Street took the news badly, with the weak payrolls figures helping send the major indices into the red for the day.

Despite making up early losses, the Dow Jones Industrial Average, S&P 500 and Nasdaq all finished down less than a tenth of a percentage point.