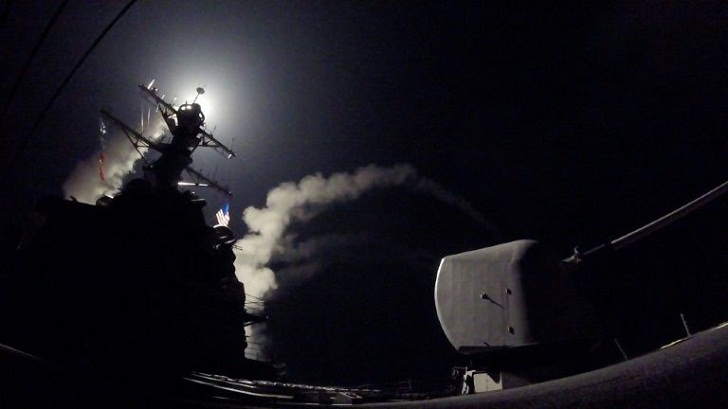 Asian energy shares rallied with oil prices Friday after the US launched missile strikes on Syria, fanning geopolitical concerns in the crude-rich Middle East and raising the prospect of friction with Russia.

Eyes are also on Florida as Chinese President Xi Jinping and Donald Trump move into day two of a relationship-building summit, which comes after months of accusations by the US tycoon that Beijing was killing US jobs and manipulating its currency.

Trump ordered a huge assault on the Shayrat Airfield in Syria in retaliation for a chemical attack with a sarin-like nerve agent that Washington blamed on President Bashar al-Assad.

The attack came just hours after Russia warned that there could be "negative consequences" if the US took military action against Syria, which it is backing in a civil war.

The news sent stocks, which had been mostly in the black, into reverse and safe-haven assets such as the yen and gold soaring. Oil prices initially surged two percent.

"The untimely news of the US missile strike, coupled with tonight's impending US non-farm payrolls, have created increased anxiety among investors," Gary Huxtable, client adviser at Atlantic Pacific Securities, said in a note. The US is due to release closely watched jobs data later in the day.

Energy firms were the big gainers, with Hong Kong-listed PetroChina jumping more than two percent and CNOOC up 1.5 percent, while Australia's Woodside Petroleum was 1.3 percent higher and Inpex in Tokyo surged four percent.

The news dragged on the majority of Asia's stock markets, with Seoul closing down 0.1 percent, Hong Kong 0.6 percent down in the afternoon and Singapore off 0.5 percent. Wellington, Taipei, Jakarta and Bangkok were also in the red.

However, Tokyo ended 0.4 percent up despite a soaring yen, which was sitting at lows not seen since November.

Gold, which along with the yen is considered a safe bet in times of turmoil and uncertainty, also jumped more than one percent to $1,266.

Oil prices, which had been lower in early morning trade, jumped as the attacks led to concerns about supplies in the Middle East. However, the gains were pared in the afternoon and both main contracts were a little more than one percent higher.

"Syria is not a big oil producer but it does potentially increase the risk of escalation in the whole region," Ric Spooner, chief market analyst at CMC Markets in Sydney, told Bloomberg News. "We're seeing a risk response to the airstrike."

The attacks on Syria overshadowed talks in Florida between Trump and Xi, which are being closely monitored by investors worried that the former reality TV star's anti-globalisation comments could spark a trade war between the economic superpowers.

Also on the agenda is the North Korea problem, with Washington concerned about the country's growing nuclear programme following a series of missile launches, the most recent coming this week.

As the two leaders met, Trump told reporters he thought they would have "a very, very great relationship and I look very much forward to it".