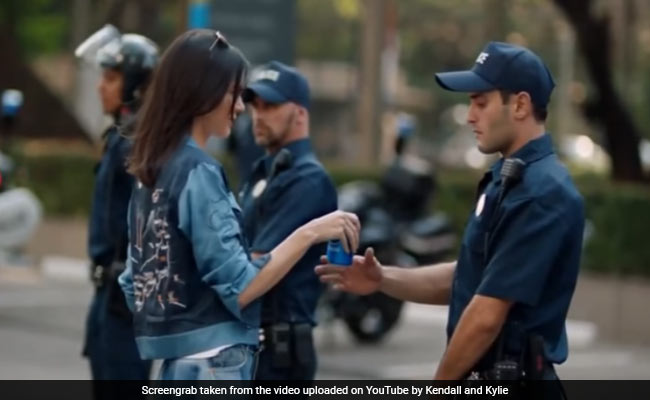 Pepsi said Wednesday it was dropping an ad featuring the supermodel Kendall Jenner that appeared to use the "Black Lives Matter" protests to promote the soda brand.

The spot provoked an outcry and widespread derision on social media claiming Pepsi was seeking to profit from the social justice movement.

"Pepsi was trying to project a global message of unity, peace and understanding. Clearly we missed the mark, and we apologize," the Pepsico unit said in a statement.

"We did not intend to make light of any serious issue. We are removing the content and halting any further rollout. We also apologize for putting Kendall Jenner in this position."

In the spot, Jenner -- daughter of the transgender star Caitlyn Jenner, and the half-sister of reality TV star Kim Kardashian -- is seen walking through a street protest and handing a can of Pepsi to a police officer, to the cheers from the crowd.

Among those mocking the ad was Bernice King, daughter of slain civil rights leader Martin Luther King, who tweeted: "If only Daddy would have known about the power of #Pepsi," with a picture of her father being pushed by a police officer.

Other social media users also found the ads in poor taste. Some said the final scene evoked an image from the "Black Lives Matter" movement when a female nurse walked up to a line of police officers in Louisiana last year.

"Could you be any more blatant with the disrespect and appropriation of a movement, @pepsi? Is this a sick joke?!" one tweet said.