Turkish President urges the US and UK to lift bans

A ban on laptops and tablets in cabin baggage on flights from Turkey and some countries in the Middle East and North Africa to the US and UK has come into effect,reports BBC.

Officials say devices "larger than a smartphone" must travel in the hold because of an increased risk that they could contain explosives.

At least one airline is allowing devices to be used up until boarding.

The US ban covers eight countries, while the UK restrictions apply to six.

Nine airlines from eight countries - Turkey, Morocco, Jordan, Egypt, the United Arab Emirates, Qatar, Saudi Arabia and Kuwait - are affected by the US ban. They operate about 50 flights a day to the US.

UAE airline Emirates is offering complimentary packing and shipping services at gates to enable passengers to use their electronic devices after check-in and until boarding.

That also means passengers flying on two-leg trips from other countries to the US through Dubai can use their laptops on the first leg of their flights.

Turkish President Recep Tayyip Erdogan has urged the US and UK to lift the bans as soon as possible.

The US Department for Homeland Security has cited attacks on planes and airports over the past two years as the reason for the ban,

Bombs, it said, had been hidden in such items as a soft drink can, used in the downing of a Russian airliner over Egypt in October 2015 with the loss of 224 lives, and the laptop used in the unsuccessful Somali attack last year.

European security experts are to meet next week to discuss the US and UK bans, the Guardian newspaper reported.

Royal Jordanian Airlines has tweeted suggestions of things to do during a long flight instead of using an electronic device.

It followed up with another tweet suggesting that passengers "do what we Jordanians do best - stare at each other!" 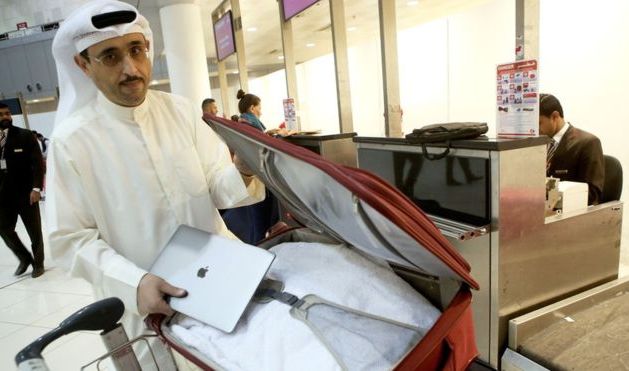