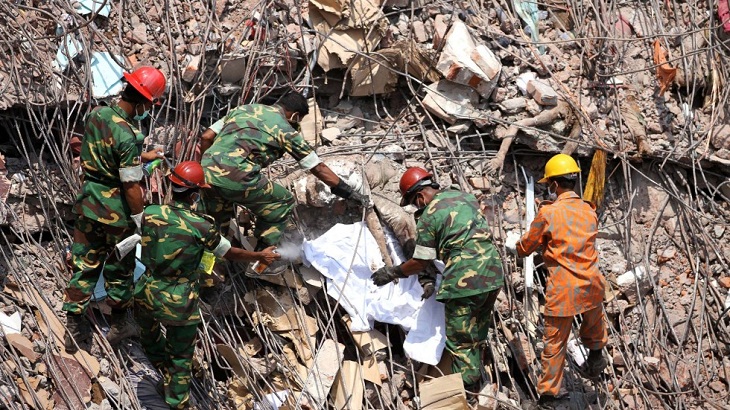 France's highest court scrapped Thursday fines for firms that fail to monitor foreign subcontractors and suppliers, a measure meant to avoid deadly disasters such as the collapse of the Rana Plaza garment complex in Bangladesh.

French lawmakers adopted in February a law that introduced legal responsibility for large multinationals over their suppliers, a move which was welcomed by rights groups but opposed by France's leading employers association.

The Rana Plaza collapse in April 2013 that killed more than 1,100 people in Dhaka triggered international outrage, with US and European clothing brands scrambling to improve deplorable safety conditions at the factories that supply them.

However the measures were voluntary, while the French law required multinationals to adopt monitoring plans.

But the Conseil Constitutionnel, which reviews whether legislation conforms with the constitution, said the law did not spell out a firm's obligations sufficiently clearly to open up the possibility of imposing a fine.

The law requires French companies with over 5,000 employees to elaborate a plan to "prevent serious infringements of human rights and fundamental liberties, health and physical security of people as well as the environment" at their foreign subcontractors and suppliers with which they do regular business.

The law included a provision for fines of up to 10 million euros ($10.8 million) for failing to comply.

The court found no trouble with introducing legal responsibility for firms to monitor their suppliers, but that the terms such as "reasonable monitoring measures" and even human rights and fundamental liberties were too vague.