Bangladesh likely to graduate from LDC by 2024 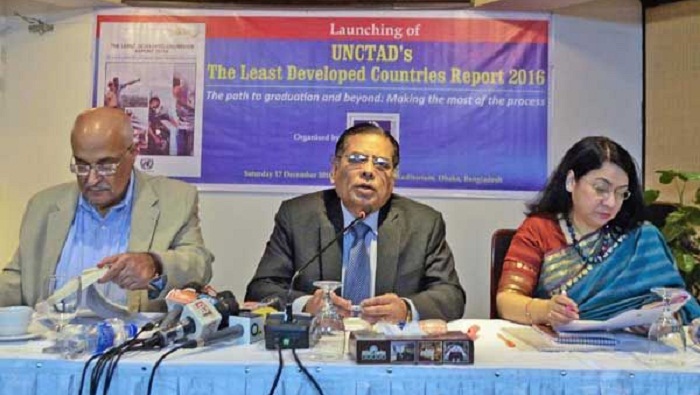 Given its current economic trends, Bangladesh is likely to graduate from the LDC status by 2024 comfortably, says Centre for Policy Dialogue (CPD).

The local think tank, however, sees challenges in sustaining the graduation.

Unlike other graduating LDCs, Bangladesh is well-positioned to cross all the three graduation thresholds—per-capita income (GNI), human assets index (HAI) and economic vulnerability index (EVI) -- by 2024, the think tank predicted at a dialogue on Thursday.

CPD held the dialogue styled ‘Bangladesh and the LDC Graduation Challenges at city hotel’ to help policymakers chalk out strategies so that the graduation becomes sustainable.

“Bangladesh’s track record concerning growth in GNI indicates that Bangladesh is likely to graduate in terms of this criteria, along with the other two in terms of which her graduation is almost certain,” said Prof Mustafizur Rahman, CPD’s distinguished fellow as he presented the keynote paper.

“This will mean that, as distinct from the majority of the other graduating and graduated LDCs, Bangladesh’s LDC graduation will be more broad-based and more balanced as it will fulfil all three criterion,” he added.

However, he expects Bangladesh to graduate ‘with momentum and sustainability’ as will have to face some global headwinds during its final graduation in 2027 and beyond.

The economist warned that some graduated countries had to defer their final graduation because of their economic vulnerabilities following the preliminary graduation.

He came up with a number of suggestions for Bangladesh including taking adequate preparation like diversifying its economy to reduce the vulnerabilities.

“Bangladesh should explore windows of opportunity and negotiate smartly with international organisations like WTO, EU and continue it at bilateral and regional levels for getting preferential trade treatments,” he said.

At the same time, it should negotiate with multilateral agencies like World Bank, ADB and regional financial entities for getting soft loans, he also suggested.

Speaking on the occasion, noted economist Dr Wahiduddin Mahmud played down suggestions that Bangladesh might lose a number of opportunities it is now enjoying as an LDC following the graduation.

“We should welcome the graduation. Although some countries pleaded deferment after graduation, but it is like under development and humiliating,” he noted.

Since 1990, Bangladesh did not get any preferential treatment in getting foreign assistance as an LDC, rather it received less than average assistance other LDCs received, he argued.

He also argued that even India is now looking to the East i.e. the ASIAN countries instead of its neighbouring Bangladesh.

For getting preferential treatment, Bangladesh should be a part of some global agreements or go for bilateral arrangements, he suggested.

He said as a densely populated country, Bangladesh’s export base is vulnerable and very narrow as it has a little surplus of agricultural or natural resource-based products.

The country’s export is heavily dependent on RMG which he termed an ‘enclave industry’.

He suggested for a more resilient industrialisation with a focus on domestic market and a shift from low-wage industries and unskilled manpower exports to technology-based ones and skilled workforce.

He vented frustration about new market exploration, saying: ‘Honestly speaking, I don’t see that many initiatives out from business people.’

He also stressed on the need for setting right strategies now for the business sector. He also called for a firm partnership with the development partners and other export destinations to cope with the situation after the LDC graduation.