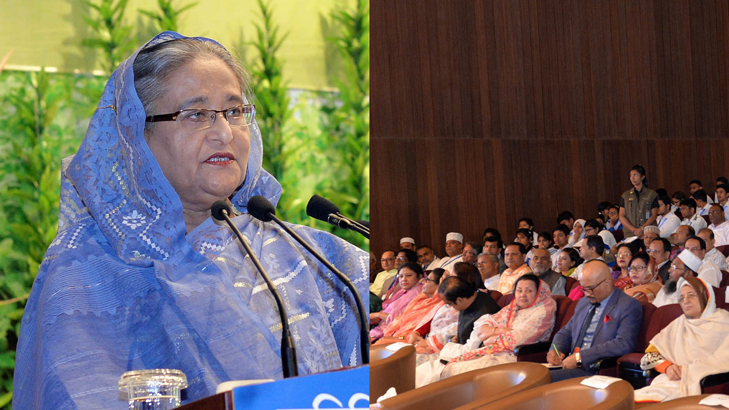 Criticising again the ‘role of Dr Yunus’ in the process of cancellation promised fund by the World Bank, Prime Minister Sheikh Hasina on Thursday said  she does not know whether people will try that reputed person for his act that caused a big loss to the country.

Without mentioning the name of Dr Yunus, she said there are some people, especially the one, who had caused immense losses to the country by halting the promised World Bank fund to Padma Bridge only to cling to the Managing Director’s post of a bank. "I don't know, whether the people of the country would try such act (of Yunus)," she said.

The Prime Minister was addressing a programme marking the National Jute Day-2017 held at the auditorium of the Krishibid Institution, Bangladesh in the city. The Jute Day was observed in the country on March 6.

Without uttering the name of the multilateral lending agency, the Prime Minister said they often gave many suggestions, and reacted differently if their suggestions went unheeded.

Blasting the role of the then MD of Grameen Bank, the Prime Minister alleged that a reputed person of the country had  hatched a big conspiracy and halted the funding of the World Bank for the Padma Bridge, which was very much vital for the people of the southern region affected much due to climate change.

"By the grace of Almighty Allah, we'll definitely construct this bridge and through this the image of the country will get brightened," she said. "I accepted the challenge as there was no corruption. I then told them (World Bank) that would not receive their funding for the project until they prove their allegation," he said.

Earlier in February, a court in Canada acquitted three business executives of charges that SNC-Lavalin Group Inc staff planned to bribe Bangladesh officials in a bid to win a $50 million contract to supervise the Padma Bridge construction.

The charges against two other accused in the case -- Mohammad Ismail and Abdul Hasan Chowdhury -- had been dismissed earlier. The World Bank alleged corruption in Padma Bridge project and began investigation in 2010.

It requested the Royal Canadian Mounted Police (RCMP) to take necessary actions based on the evidence they got during their own investigations and from 'four informants', whom the court has now called 'tipsters'. The World Bank then withdrew the funds it had promised for the Padma Bridge project following the alleged corruption.