Circus lionized for cutting animal acts will bring them back 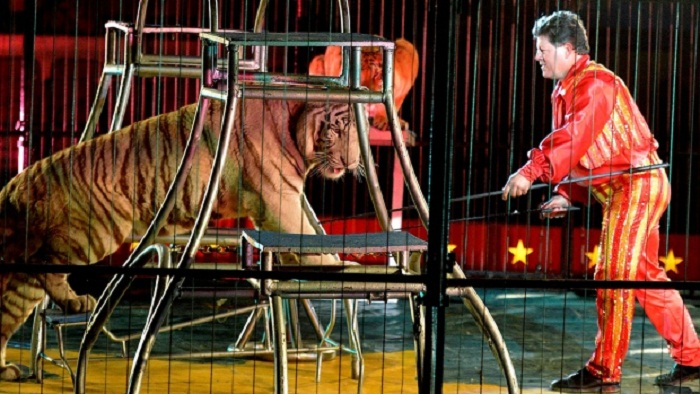 BOSTON: A circus is being lionized for bringing back animal acts a year after earning praise from animal rights groups for dropping them to keep up with changing public attitudes.

The Melha Shrine Circus, which has seven performances over four days scheduled for May in western Massachusetts, brought back performing elephants, tigers and dogs because that's what people want, circus chairman Allen Zippin said.

The circus, which raises money for the fraternal organization's charitable endeavors — including the Shriners Hospitals for Children in Springfield — lost money for the first time in its 63-year history in 2016.

"Paid attendance was down 6,500 people last year," when compared to 2015, he said. "We had people asking for refunds after finding out there were no animals."

Animal rights activists have been pressuring circuses to drop animal acts for years, saying the acts are cruel and inhumane.

The Ringling Bros. and Barnum & Bailey Circus retired its iconic elephant act last spring. Months later, the nation's most famous circus announced it would close for good this year after almost a century and a half in business.

Although several reasons for the demise were cited, the end of the elephant act and changing public attitudes about animal-based entertainment were among them.

Circuses, whether commercial or charitable, don't need animals to thrill, said Sheryl Becker, who started an online petition to get the Melha Shriners to drop animal acts. There are plenty of circuses that don't have them, including Cirque du Soleil and Circus Smirkus. Some other Shriners-sponsored circuses have stopped hiring animal acts, said Becker, who is president of Western Massachusetts Animal Rights Advocates.

Her petition had more than 66,000 signatures as of Friday.

Becker loves the Shriners and supports their mission wholeheartedly, but thinks hiring animal acts to perform in the circus tarnishes their image.

Her late father was a Shriner who took her to the Melha Shrine Circus as a child. Like most kids, she was enamored with the animals. But her attitude changed in her early teens.

She says the animals are treated inhumanely, housed in cramped conditions and receive inadequate veterinary care.

"It is fear itself that makes these animals do these stupid and degrading tricks," she said.

People for the Ethical Treatment of Animals had praised the Melha Shriners last year, but the group was quick to condemn the return of animal acts.

"The decision to bring back animals is foolish, short-sighted and out of touch," said Rachel Mathews, PETA's associate director of captive animal law enforcement.

Forcing animals to perform "confusing and uncomfortable" tricks sends the wrong message to the very people the circus is trying to entertain.

"All it does is teach kids that it's OK to bully and subjugate," she said.

Zippin said he appreciates the important watchdog role animal rights groups perform. The Shriners, he said, take great care to ensure that the acts they hire treat their animals with love and care.

He said he even envisions a day when animal acts will be eliminated from all circuses.