Afridi, Cricket will never see a performer quite like him 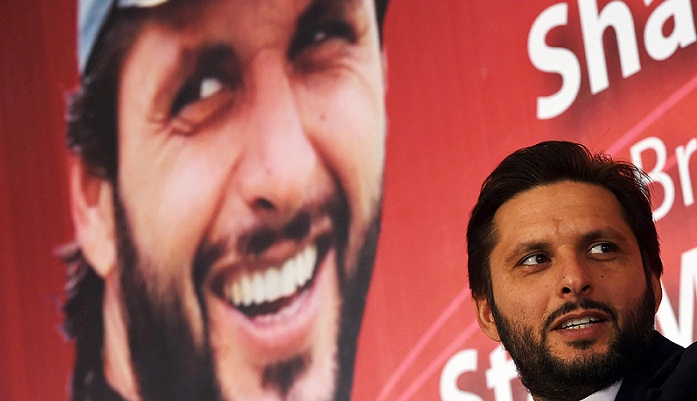 If fan following was a yardstick of greatness in cricket, Pakistan's colourful all-rounder Shahid Afridi would probably be ranked his country's greatest ever player.
Ever since he hit a 37-ball hundred in only his second one-day international -- against Sri Lanka in Nairobi in 1996 -- Afridi has been a cult figure in Pakistan.
His announcement last week that he was quitting one-day cricket after next year's World Cup has left his millions of fans pondering: who to watch after him?
No cricketer in Pakistan has had the persona and the box office pull of the hyperactive, big-hitting Afridi, who filled stadiums throughout his career -- and often emptied them when he was out.
The fervour for watching him bat was such that when he was dismissed first ball by an unknown Zimbabwe bowler in Peshawar a few days after his world record hundred, the crowd chanted: “Try ball, let Afridi bat again!”
Girls swooned for a glimpse of him and many wanted to marry him. In 2004 two women came in bridal dress to a ground and were only convinced to leave after meeting him face to face.
Afridi won hearts with his unorthodox, buccaneering style -- ignoring the coaching manual to rely on swagger and raw talent.
'Unmatched popularity'
It was an approach tailor-made for TV and Afridi's career coincided with the explosion of Pakistani media that followed General Pervez Musharraf's liberalisation of the sector in 2002.
Pakistani cricket writer and historian Osman Samiuddin said the exposure meant Afridi's popularity become virtually unmatched, in any era.
Shahid Afridi (R) receives flowers from a young supporter as he attends a local event in Karachi.
“He has played in the right age for sure, when a booming electronic media has made him a bigger public presence than previous stars such as Imran Khan, Wasim Akram or Waqar Younis,” Samiuddin told AFP.
The Afridi effect can be seen in any street game in Pakistan, where millions of children copy his style -- trying to smash every other ball out of the park.
Afridi's superstardom on the field made him the face of Pakistan off it, and his likeness is plastered across billboards and TV ads everywhere in the country.
Even now, in the twilight of his career, Afridi advertises everything from shampoo, banking and skin cream to chewing gum, with a ubiquity surpassed perhaps only by Sachin Tendulkar in India.
“Afridi may not always be the star performer but he remains a star,” said Kamil Ahmed, who works for a top advertising agency in Karachi.
“His name can lift a product, especially those for young people, who are mad for him.”