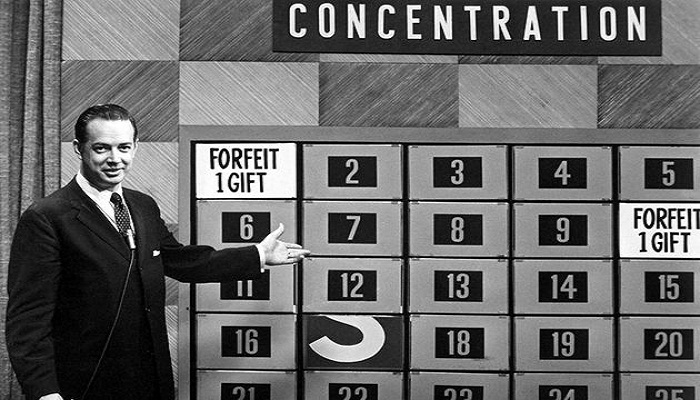 Hugh Downs hosted the TV game show Concentration from 1958 to 1971.

Most of us take notes be cause we think doing so will help us remember what we’re learning. According to psychologists at Mount St. Vincent University in New York, our brains have a different view: “Hey, ferent view: “Hey, he’s writing this down, so no need to warehouse this stuff. Better to make room for other stuff.” Researchers call this phenomenon intentional forgetting.
In experiments, subjects played the memory game Concentration, in which players memorize images on cards and try to identify them after the cards have been covered up. Half of the subjects was able to study the cards before they were covered; the other half was allowed to take notes. Then the researchers took away the notes and made them play. The note-takers did significantly worse than the group that knew they had to concentrate on the images and position of the cards.
The researchers concluded that “participants adopted an intentional-forgetting strategy when using notes to store certain types of information.” In other words, taking notes didn’t improve memory; it made recall worse because the brain was forgetting as fast as its owner was writing.
Next time a boss asks why you’re not taking notes, explain that you want to make sure you remember. (On the other hand, if you completely space out, it’s always useful to have notes to fall back on.)