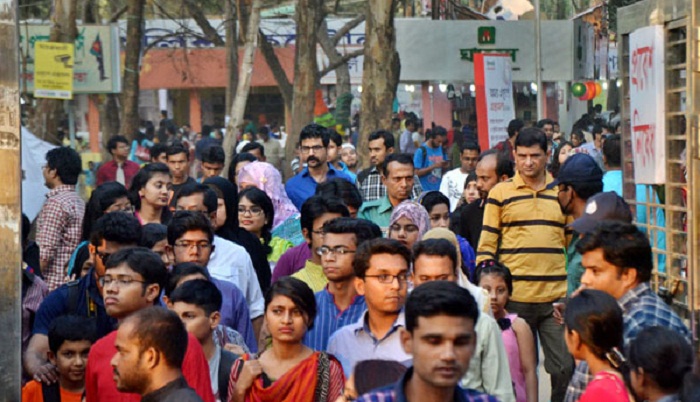 Thousands of visitors of all ages flocked to the Amar Ekushey Granthamela- 2017 that began Wednesday on the premises of Bangla Academy and the Suhrawardy Udyan in the city.

Prime Minister Sheikh Hasina inaugurated the fair at a colourful function this afternoon.

On the occasion, she put signature on the "udbhodhani smarak" (opening memento) of the fair and visited different stalls of the fair.

The premier also inaugurated a four-day International Literature Conference 2017 and handed over prizes among the winners of 'Bangla Academy Sahitya Puroshkar 2016'.

"Nirbachita Prabandha", authored by Prime Minister Sheikh Hasina, "Ocean of Sorrow", a translation of noted Bengali novelist Mir Mosharraf Hossain's famous novel "Bishad Sindhu" and "Hundred Poems From Bangladesh", published from Germany, a compilation of Bangladeshi poems published in Swedish language were handed over to the prime minister at the function.

Besides, 14 publication houses including Bangla Academy got 15 pavilions covering an area of total 6,000 square feet. Some 100 little magazines have been allocated spaces at the Little Magazine Corner, south side of Burdwan House on the academy premises.

Children corner at the Suhrawardy Udyan has been decorated gorgeously with colorful lightings and toys of children this year like the previous years. During the month-long fair, every Friday and Saturday will be observed as Shishu Prohor (children hour).

Two main entry gates have been erected at Teacher-Students' Centre (TSC) of Dhaka University and Doyel Chattar while three gates will be at Bangla Academy and eight gates at Suhrawardy Udyan at entry and exit points.

Stringent security measures, including closed-circuit camera surveillance, have been taken to avert any untoward incident during the fair.

Seven personalities have been awarded the Bangla Academy Sahitya Puroshkar for 2016 for their outstanding contributions to their respective fields of literature.

Each winner of the Bangla Academy award received Taka one lakh cash, a crest and a certificate from the prime minister.