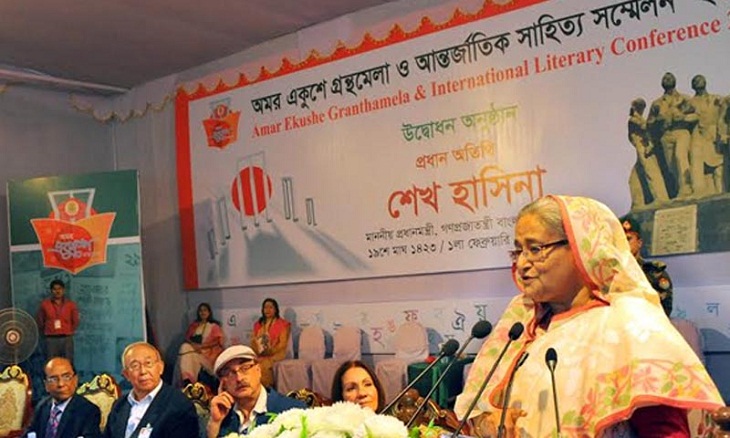 Prime Minister Sheikh Hasina on Wednesday urges all to encourage their children to read literature as it can prevent them from slipping into a wrong path.

"I believe that literature has the power to rescue our children from the wrong path they are following these days," she said.

Hasina came up with the call while speaking at the inaugural ceremony of the month-long 'Amar Ekushey Boi Mela' and the three-day 'International Literature Conference' on the Bangla Academy premises.

The International Literature Conference will begin at the fair venue on Thursday, the 2nd day of the book fair.

There will be a seminar at the main stage of the fair at 4 pm everyday from February 5-28.

As in previous years, the venue of the fair has been extended to nearby Suhrawardy Udyan with some changes.

Strict security measures have been taken in and around the book fair venue to avert any unpleasant incident during the fair.

Bangla Academy is organising the International Literature Conference to build a good bonding among local and foreign writers, poets, novelists as well as to create a platform to exchange their literary works.

'International Literature Conference Writers' Honorary Award' will be given to six prominent personalities of Bangladesh on the 2nd day of the fair.