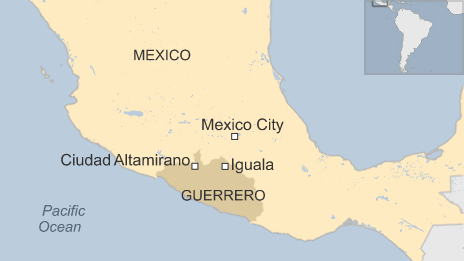 A priest who was kidnapped in Mexico's south-western state of Guerrero on Monday has been found shot dead, officials say.
The body of Father Gregorio Lopez was discovered near the city of Ciudad Altamirano.
A group of priests later rallied in the city to condemn the murder.
Father Lopez was seized by gunmen from Ciudad Altamirano's seminary, where he taught. The motive for the killing remains unclear.
A friend of the priest told local media that Father Lopez was kidnapped after he accused drug gang Guerreros Unidos of the abduction and alleged murder of 43 students in September.
He is the third priest to be killed this year in Guerrero state, which has been at the centre of drug-related violence in Mexico.
Last month, forensic experts identified the body of a Ugandan Catholic priest among the remains found in a mass grave. Father John Ssenyondo had been missing since being kidnapped in April.
The grave was located by federal police looking for the missing students.
On Friday, demonstrators in several Mexican cities commemorated the disappearance of the students on 26 September - exactly three months ago.
Police in the town of Iguala allegedly detained them following a clash that left six people dead.
Authorities say the police turned the students over to members of a drug gang who killed them and burned their bodies.
So far, the authorities have only identified the remains of one of the students.