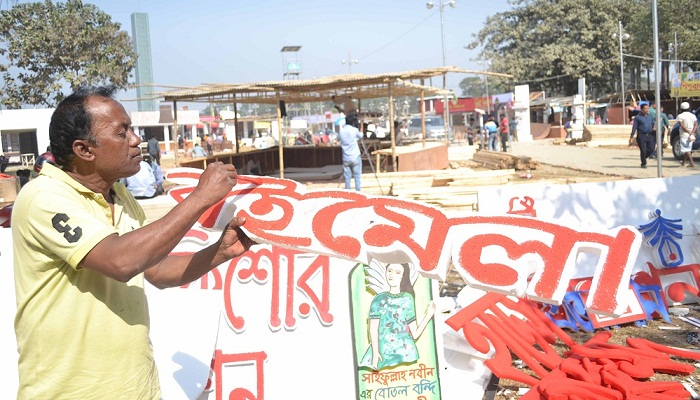 The month-long 'Amar Ekushey Boi Mela' will kick off in the capital on Wednesday (Feb 1).

A three-day 'International Literature Conference' will also be held at the fair venue from Thursday, the 2nd day of the book fair.

Prime Minister Sheikh Hasina will inaugurate both the book fair and the literature conference on the Bangla Academy premises at 3pm on Wednesday.

Bangla Academy disclosed the details of the fair at a press conference at the academy on Monday.

Member secretary of the book fair committee Jalal Ahmed read out a written statement at the press conference while Bangla Academy Director General Shamsuzzaman replied to questions from reporters.

Manfred Chobot from Austria, Jona Burghardt and Tobias Burghardt from Germany, Luz Maria Lopez and Maria De Los Angles Camacho Rivas from Puerto Rico and Prof Dong You Chen from China will be present at the inaugural ceremony as distinguished foreign guests.

The Bangla Academy Shahitya Puroshkar will also be distributed at the opening ceremony.

There will be a seminar at the main stage of the fair at 4pm every day from February 5 to February 28.

Like the previous year, the venue of the fair has been extended to nearby Suhrawardy Udyan with some changes.

The authorities have allotted a total of 663 units - 114 at the Bangla Academy ground to 80 organisatons and 549 at Suhrawardy Udyan to 329 organisations.

Besides, 15 pavilions have been allocated for 14 publishing houses, including Bangla Academy.

There will be strict security arrangements in and around the book fair venue to avert any unpleasant incident during the fair.

Bangla Academy will organise the International literature Conference to build a good bonding among the local and foreign writers, poets, novelists as well as to create a platform to exchange their literary works.

Meanwhile, Bangla Academy has taken punitive action against 19 publications on various charges, including violation of the code of conduct of Amar Ekushey Boi Mela, selling pirated books and those 'hurt religious sentiments'.

Of them, tour publications -- Ba-Dwip Publication, Rongin Ful, Oikya and Nil Pori - were banned from the fair.