A Pacific paradise in the Raja Ampat islands

The Raja Ampat archipelago, off the Indonesian province of West Papua, is famed for its whale sharks, manta rays and diverse coral. But I’m here to witness another natural phenomenon – a lake that’s home to thousands of giant golden medusa jellyfish. And, what’s more, I’m going for a swim.

Some jellyfish can kill people, but the species here are unarmed. Bobbing around in the lake, gelatinous blobs collide with me, tentacles wrap gently around my legs and torso, their bulbous bodies pulse like beating hearts in an oddly therapeutic dance of the deep.

There are two known jellyfish lakes on Misool island; the one I’m at can be reached by dinghy, while the other requires a short hike on foot. Seemingly landlocked, these saltwater lagoons are connected to the ocean via fissures in the limestone and the marine species inhabiting them have thrived and evolved in these isolated ecosystems for thousands of years.

The archipelago is hard to reach. Part of the famed Coral Triangle, Raja Ampat lies north-west of New Guinea’s Bird’s Head peninsula, in the long-disputed Indonesian province of West Papua. It’s a pristine conservation area in a remote corner of the South Pacific, an area where karst rock formations rise out of the sea and saltwater crocodiles cohabit with sharks.

The only way to get here is by boat (public ferries leave several times a week from Sorong, West Papua). 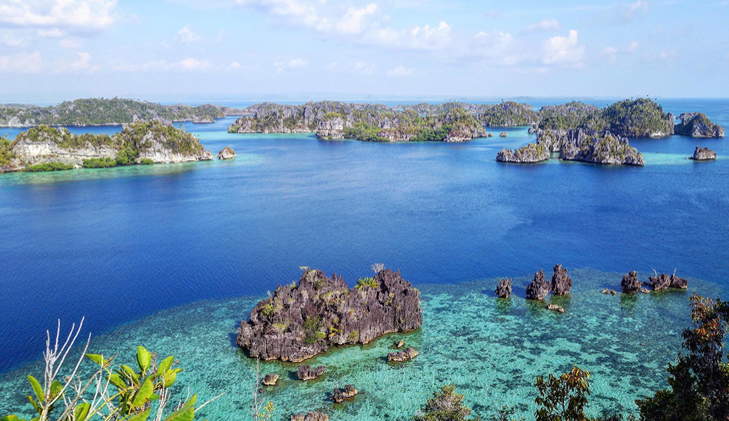 A Pacific paradise in the Raja Ampat islands