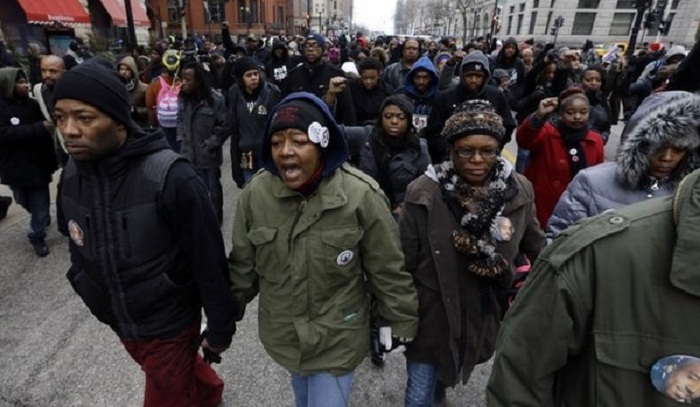 The US justice department says it will review the fatal shooting of an unarmed black man by a white police officer in April in Milwaukee.
The decision came after a local prosecutor said he would not bring charges against the officer.
He ruled that Christopher Manney had acted in self-defence when confronted in a park by Dontre Hamilton.
The launch of the federal investigation follows protests across the US over the shootings of two other black men.
Dontre Hamilton in an undated photo Dontre Hamilton in an undated photo
In both cases grand juries decided not to indict white police officers.
One of the incidents occurred in New York, where Mayor Bill de Blasio has called for the city to heal after the subsequent fatal shooting of two police officers led to controversy over his role.
In Milwaukee, Mr Hamilton's family had reacted with anger to the decision by County District Attorney John Chisholm not to charge Mr Manney, and appealed for peaceful protests.
Mr Hamilton was shot after workers at a Starbucks cafe called police to complain about him sleeping in a park.
According to Mr Manney, Mr Hamilton resisted arrest when he tried to frisk him, and hit him on the neck after the two exchanged punches. Mr Manney then shot him 14 times.
Mr Hamilton's family said he had suffered from schizophrenia and had recently stopped taking his medicine.
His death triggered a series of protests in Milwaukee and Mr Manney was dismissed over the incident - a decision the former officer has appealed against.
Explaining his decision in a written statement, Mr Chisholm said: "Officer Manney's use of force in this incident was justified self-defense and that defense cannot be reasonably overcome to establish a basis to charge Officer Manney with a crime."
The federal review will seek to determine whether there was any violation of civil rights law.