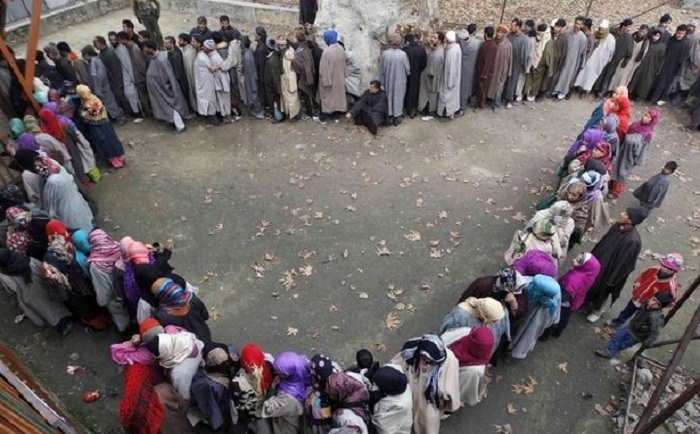 Counting of votes has begun in Indian-administered Kashmir, where Prime Minister Narendra Modi’s BJP is trying to win power for the first time.
Early leads suggest a neck-and-neck contest between the regional People’s Democratic Party and the BJP.
A party needs 44 seats in the 87-member state assembly to form the government.
The disputed Kashmir region is claimed in its entirety by both India and Pakistan and the rivals have fought two wars over it.
Thousands of soldiers were deployed in and around polling stations during the five-phase voting which began on 25 November and ended on 20 December.
Some 65% of the more than a million eligible voters cast their ballots, authorities said.
Two regional parties dominate politics in Kashmir - the governing National Conference and the opposition People’s Democratic Party (PDP).
Correspondents says the BJP has never been a serious contender and it has a non-existent base in the Muslim-dominated Kashmir Valley, given its hardline views on the state’s tenuous relationship with India.
But under Mr Modi, who swept to power in the May general elections, the BJP is making an audacious bid to capture Jammu and Kashmir.
As counting began on Tuesday, early leads showed both the BJP and the PDP leading in 25 seats each.
The BJP is, however, likely to get a clear majority in the 81-seat assembly in the eastern state of Jharkhand where elections were held at the same time.
Early leads showed the party ahead in 33 seats, while its main rival Jharkhand Mukti Morcha (JMM) was leading in 19 seats.