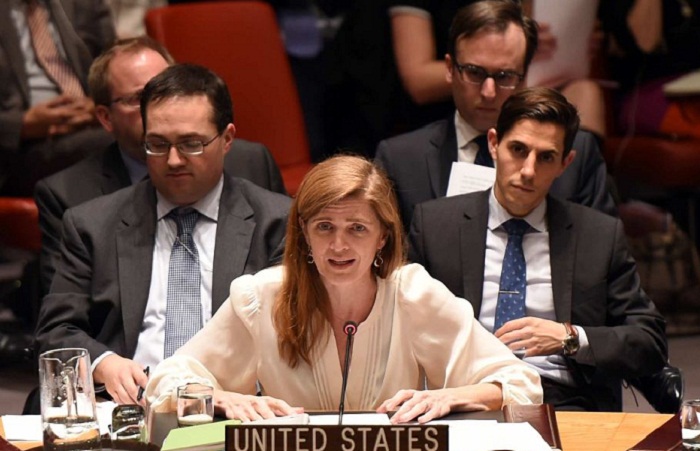 The US Ambassador to the UN, Samantha Power, tells the Security Council life in North Korea is a “living nightmare”, after the council voted to put the state’s widespread human rights violations on its agenda for the first time, overruling objections from China and Russia.
It is the first time the Security Council has gone beyond its usual discussion of North Korea’s nuclear program, to include its weak human rights record.
Ms Power spoke on a UN report from earlier in the year, detailing widespread and systematic abuses which it said constituted crimes against humanity.
“Ahn Myong Chul, a former guard at Prison Camp 22, spoke of guards routinely raping prisoners,” she said.
“In one case in which a victim became pregnant and gave birth, the former guard reported, prison officials cooked her baby and fed it to their dogs.”
Ms Power also touched on the hacking of Sony Pictures, which Washington has blamed on North Korea.
She dismissed as “absurd” North Korea’s calls for a joint investigation of the incident with the United States and threats of retaliation if it refused.
“It is exactly the kind of behaviour we have come to expect from a regime that threatened to take ‘merciless countermeasures’ against the US over a Hollywood comedy, and has no qualms about holding tens of thousands of people in harrowing gulags,” Ms Power said.
Ms Power and other Western members called on the council to refer the nation to the International Criminal Court (ICC), echoing the UN General Assembly’s resolution passed on Friday, urging the UNSC to refer the state to The Hague court for crimes against humanity.
“It is incumbent on the Security Council to consider the [UN] Commission of Inquiry’s recommendation that the situation in North Korea be referred to the International Criminal Court and to consider other appropriate action on accountability,” Ms Power said.
The UNSC was told that North Korea’s violations threaten to have a destabilising impact on the region and international security.
Australia’s ambassador to the UN, Gary Quinlan, told the council the totalitarian state must be dealt with.
“The DPRK (North Korea) is in effect a totalitarian state which uses violence and repression against its own citizens to maintain itself and its threatening military apparatus in power,” he said.
“The regime’s atrocities against its own people have created an inherently unstable state.”
North Korean UN diplomat Kim Song rejected the decision, accusing the US of raising the issue as a political weapon to pressure North Korea.
He said Pyongyang would decide on how to respond to the council decision.
In a letter to the council sent on Monday, North Korean ambassador Ja Song Nam said the council actions were “a politically motivated dangerous attempt to lay a ground for an invasion of the DPRK under the pretext of ‘human rights’”.
He said it was “the most undisguised manifestation of the hostile policy pursued by the United States against the DPRK”.
The council meeting on North Korea came after a rare procedural vote sparked by China’s objections to the inclusion of North Korea on the council’s agenda.
China’s ambassador Liu Jieyi said the Security Council was not the forum for human rights issues and that it should refrain from doing anything that might cause an escalation.
Russia and China voted against the inclusion of North Korea on the council’s agenda, but as there are no vetoes in procedural votes of the council, the Chinese attempt to defeat the measure failed.
“Rarely has such an extensive charge-sheet of international crimes been brought to this council’s attention,” Assistant Secretary-General for Human Rights Ivan Simonovic told the council.
“It documents a totalitarian system that is characterised by brutally enforced denial of the right to freedom of thought, conscience and religion, as well as the rights to freedom of opinion, expression, information and association.”
Despite the historic vote, Council scrutiny is unlikely to land North Korea at the ICC, which looks at genocide and other crimes against humanity, as China could veto a council referral to the ICC.