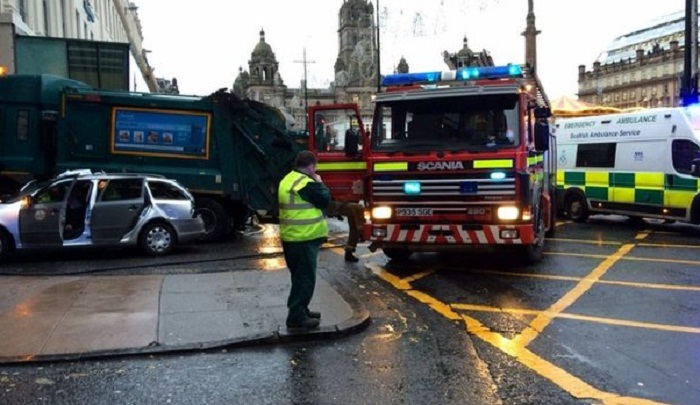 Several people have been killed and a number of others injured after an out-of-control bin lorry crashed into pedestrians in central Glasgow.
The council vehicle then crashed into the Millennium Hotel, near Queen Street station in George Square, at 14:30.
Eyewitnesses described emergency services battling to save the lives of injured people on the street.
Police Scotland have declared a major incident but said there appeared to be nothing "sinister" about the crash.
The force has launched a dedicated number - 01786 289070 - for anyone who has concerns about relatives or friends.
Police said the bin lorry was travelling north on Queen Street, outside the Gallery of Modern Art, when "it was in a collision with a pedestrian".
'Out of control'
It then continued north on Queen Street, mounted the pavement and struck a number of other pedestrians, before crashing into the Millennium Hotel at George Square, which is the scene of Glasgow's annual Christmas festival.
BBC Scotland's Laura Bicker said: "What we have heard from eyewitnesses is that the bin lorry appears to have careered out of control and hit a number of people.
"We've also heard from one witness who described the driver of the bin lorry as 'slumped over the wheel'."
Witness Janey Godley told the BBC News Channel that people were "getting CPR (cardiopulmonary resuscitation) on the ground" when she arrived in the square.
"I think I was there just as the ambulances arrived, because there was stuff strewn, debris strewn, all over the street, Christmas shopping all over the street," she said.
Ms Godley said she saw three people being treated by emergency crews.
She said: "People were being worked on, people were fighting for their lives on the pavement as shoppers were standing.
"People just like me had arrived on the most shocking scene they ever wanted to see this Christmas. George Square is a square with a fairground and an ice rink and Santa and the tree and everything."
Ms Godley added: "It was the most horrible thing to watch all the ambulances and the people in the street, and yet the fairground in the background and people just in shock."
She said it was "an awful tragic thing to happen at this time of year".