The family with 34 children! 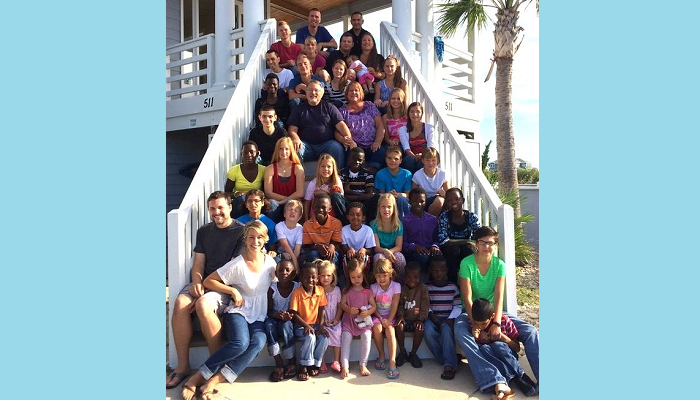 Jeane and Paul Briggs have 34 children - 29 of whom were adopted from other countries including Mexico, Ghana and Ukraine. Now their family is about to get even bigger.
In 1985, Jeane Briggs was at church when she was shown a photograph of a two-year-old boy. He was living in an orphanage in Mexico, was blind and had been beaten so badly that he was in a body cast - his legs were broken and he had suffered brain damage.
Shortly after seeing that picture, Jeane and her husband Paul went to Mexico to visit the orphanage and met the little boy. “I saw him knowing that he could be our child,” recalls Jeane. “I knew instantly that we should adopt him.” Several months later they did just that.
Abraham is now 31 and lives at the family home in West Virginia - he has a girlfriend and, despite his injuries as a child, is a naturally talented musician who can play the piano and guitar and composes his own music.
Since Abraham came to live with them, the Briggs have adopted a further 28 children from Russia, Ukraine, Bulgaria and Ghana. They also have five biological children, making Jeane and Paul the parents of 34 children.
You might think that would be enough for any parent, but the Briggs family is about to get even bigger - Jeane and Paul are in the process of adopting another two baby boys from Ghana.
“They are three months old and were abandoned in the bush,” says Jeane. Jabin Kofi and John David will be joining the family in the US once the adoption process is complete, taking the number of Briggs children to 36.
Each of the adoptions has taken a different length of time - the quickest was completed in just over two months, while the longest took nearly a year and a half. In many cases, Jeane and Paul have been able to expedite the process because of the children’s medical needs.
Over the past 29 years, as more children have arrived, the Briggs’s house has been adapted for their expanding family. It now has nine bedrooms - two of which resemble dormitories - and at over 5,000 square feet, the building is more than twice its original size.
But the house isn’t just a home, it’s also where the children go to school - Jeane has been home-schooling the children for nearly 30 years.
Each weekday morning the children get up between 07:00 and 07:30, have breakfast, do their chores and get ready for the school day which starts at 09:00.
The system seems to work well and has produced several college graduates, says Jeane. It also means the family doesn’t have to co-ordinate what would be a pretty complex school run.
Mealtimes are busy to say the least - Jeane describes them as “crazy”. Each day at breakfast, lunch and dinner there are about 30 mouths to feed and the family frequently relies on paper plates and cups. Their single dishwasher gets busy - it’s filled three times a day as it is.
And all that food doesn’t come cheap, with the grocery bill averaging $1,000 (£640) per week. Paul’s well-paid job and Jeane’s careful budgeting mean they have been able to cope with the expenses.
The children that have been adopted have not had easy lives. Many were suffering from abuse, neglect or hunger when they met Jeane and Paul and some like Abraham were orphans.
Twenty-four-year-old Joseph, from eastern Ukraine, was left in the hospital shortly after he was born. He was living in an orphanage when he was adopted.
“I had a cleft lip and palate, I was treated differently and people made fun of me,” he says. “Every year, our orphanage would go on vacation to the Black Sea but I would be sent to [a] hospital.”
In 2005, when Joseph was 14, he found out that he was going to be adopted - it was a life-changing moment.
“I now had a family and would never have to worry about being left behind. If I was left in the orphanage, I would have been dead or homeless. Life would have been hell for me because of my special needs.”
Stories like Joseph’s are not uncommon in the Briggs family - some of the other children were also abandoned or had unhappy childhoods. Many came from dysfunctional families or had specific medical requirements.
Ten-year-old Andrew from Bulgaria is blind and suffered from a traumatic brain injury. When Jeane and Paul first met him, he was five years old and weighed only 17lb (7.5kg).
“He was slowly being starved to death, he couldn’t even hold his head up,” says Jeane. “But within a few months he was walking around our home.”
Cate who is now 22 and Leah, 21, were adopted from the same orphanage in Ukraine.
“I was at the orphanage and they called me into the director’s office,” recalls Cate. “They said, ‘There’s a family that wants to adopt you, do you want to be adopted?’ and of course I said, ‘Yes’”.
Coming from the difficult life of the orphanage, it was the small things that stood out for Leah when she arrived at her new home, “I was glad to have a pair of clean socks or just anything that was clean.”
There are several sets of siblings who have become part of the Briggs family. Tia, who is 18 and from eastern Ukraine was adopted with her two sisters - their mother and grandfather had died from tuberculosis. A few years before that, their father had been murdered.
She remembers the day she met her new brothers and sisters. “When I got home I saw tonnes of people rushing at me to hug me, cheering and everything,” she says. “I’m so glad that I’m here, I don’t know what I’d be doing if I was there, I don’t know if I’d be alive.”