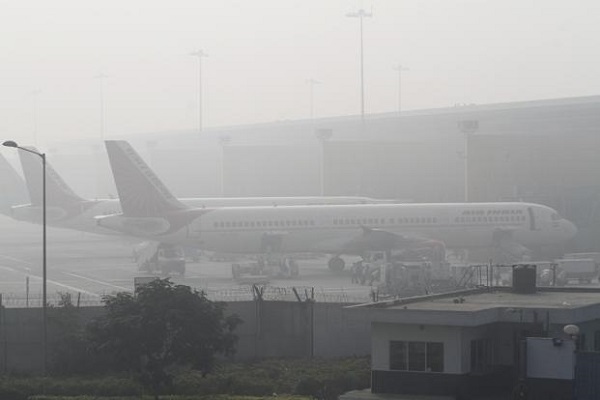 A dense fog has enveloped the capital, Delhi, and parts of northern India, causing massive travel chaos.
Visibility at runways at the airport in Delhi dropped to below 50 metres and reports say that at least 36 flights were delayed.
Dozens of trains were also cancelled or delayed, and road traffic on Monday morning was crawling. The temperature is hovering around 5.7C.
Traffic disruption due to fog in winter has become routine in northern India.
A number of cold-related deaths have also been reported.
Reports say seven people died in two separate incidents in Delhi and neighbouring Uttar Pradesh state on Sunday after inhaling carbon monoxide from coal fires in their rooms to keep themselves warm.
The dead included four children in a family in Bijnore in Uttar Pradesh.
Reports from the Kashmir Valley say Srinagar city recorded a minimum temperature of minus 1.8C on Sunday.
Cold weather is also continuing in most parts of the northern states of Punjab, Haryana, Uttar Pradesh, Madhya Pradesh and Rajasthan, the meteorological department says.