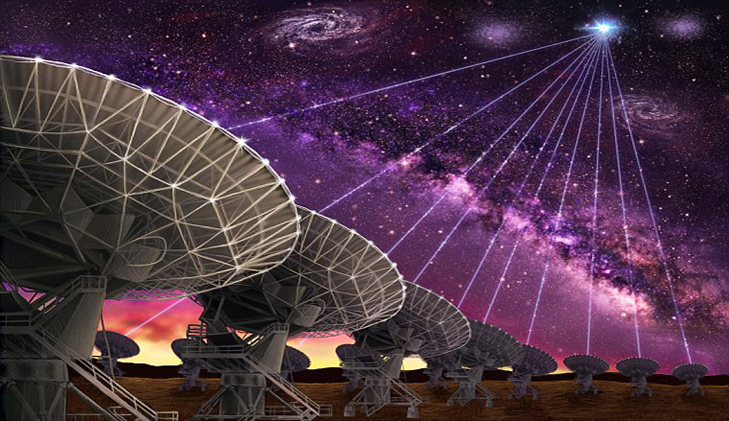 Astronomers have found the source of a deep space radio wave burst for the first time.

For the first time, scientists have nailed down a source of fast radio bursts, one of astronomy's most enigmatic phenomena.

A dim dwarf galaxy 2.5 billion light-years from Earth is sending out the mysterious millisecond-long blasts of radio waves, researchers report Wednesday in Nature and Astrophysical Journal Letters. The bursts traverse vast expanses of time and intergalactic space before reaching our planet.

FRBs are extremely brief pulses of radio waves, flaring with the power of about 500 million suns. Scientists have recorded just 18 of these signals, but studies suggest there could be as many as 10,000 a day. Their unpredictability makes them difficult to spot, and they appear to come from all over the sky.

Understanding these bursts may open up a new field in astronomy, added Lorimer, who was not involved in the new reports. Because they travel so far to reach Earth, FRBs could be a tool for studying the mostly empty space between galaxies and mapping the distribution of matter across the universe. But first astronomers have to figure out what exactly they are.

“I am not exaggerating when I say there are more models for what FRBs could be than there are FRBs,” said Cornell astronomer Shami Chatterjee, the lead author of the new Nature paper.

Many scientists think the bursts are emitted by distant neutron stars, the superdense embers of exploded suns. But some believe they must originate in our own galaxy. Still more suggest that FRBs could be caused by cataclysms like a supernova or a collision of two stars. This last theory was compelling because most FRB detections were one-off events — astronomers never spotted more than one flare from a single source.