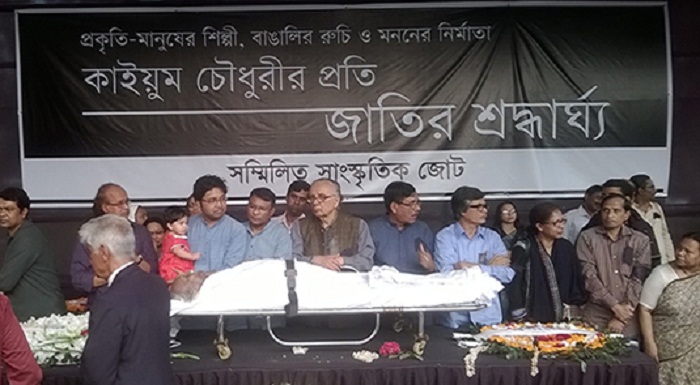 Veteran artist Qayyum Chowdhury was laid to eternal rest in Azimpur graveyard in the capital on Monday at about 4:45pm after his last Janaza at Azimpur Chapra Mosque.
The body of the noted artist was brought to the Shaheed Minar premises on an ambulance around 12pm. Hundreds of his fans and admirers lined up to pay tribute with flowers.
Earlier in the morning, his body was taken to Dhaka University’s fine arts institute.
Artist Qayyum Chowdhury died at the Combined Military Hospital in the capital on Sunday night.
He had fallen ill at the time of addressing the ongoing Bengal Classical Music Festival at the Army Stadium around 8:40pm. He was immediately rushed to the CMH.
At the CMH, doctors examined his condition and Qayyum was put on life support. Around 9pm, the doctors announced his demise.