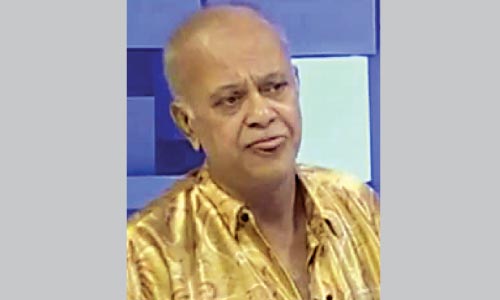 Renowned journalist and columnist Zaglul Ahmed Chowdhury was killed in road accident while getting down from a bus at Karwan Bazar area in the capital on Saturday night. He was 66.
Syed Abdal Ahmad, general secretary of the Jatiya Press Club, said he slipped onto the ground at Sonargaon crossing while getting down from a bus at around 8:00pm and received injuries to the head.
The accident took place as the bus suddenly started moving while he was getting down from it, he added.
A pedestrian took him to nearby Mohona Clinic. Later, he was shifted to Comfort Hospital at Green Road.
Doctors declared him dead at around 8:30pm while undergoing treatment at the intensive care unit of the hospital.
Zaglul Ahmed Chowdhury, consulting editor of The Financial Express, met the tragic end of his life while going to private television channel ‘NTV’ at Karwan Bazar to join a talk-show.
His body has been kept at the Bangabandhu Sheikh Mujib Medical University (BSMMU) mortuary.
He left behind his wife, one son and one daughter to mourn his death.
Meanwhile, President Abdul Hamid, Prime Minister Sheikh Hasina and BNP Chairperson Khaleda Zia expressed deep shock at the sad demise of the noted journalist.
In separate messages, they prayed for eternal peace of the departed soul and conveyed deep sympathy to the bereaved family members.
Zaglul Ahmed Chowdhury was made chief editor and Managing Director of the state-run Bangladesh Sangbad Sangstha (BSS) in 2006.
He had served as a special correspondent of the agency for 35 years.
He wrote on South Asia and worked as the diplomatic correspondent for the major part of his career.
Zaglul Ahmed Chowdhury authored a number of books, including 'Bangladesh's Relations with India, Myanmar and Nepal: The Impact on Citizens and Development' and 'Global Flashpoint: South Asia and Middle East' apart from many write-ups on politics and foreign relations.