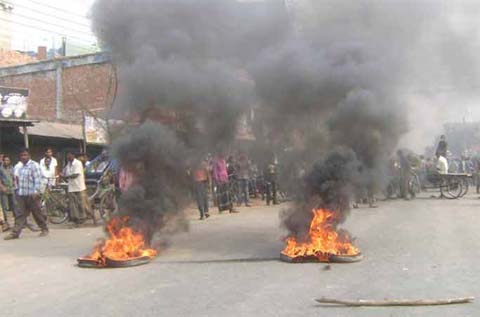 The local people of Phulbari coal mine area in Dinajpur have barricaded the Dhaka-Dinajpur Highway again on Thursday morning protesting implementation of Phulbari Coal Mine Project.

Agitated people blockade the highway and railroad through burning tires.
Meanwhile, traffic movement between Dinajpur and rest of the country is on through Syedpur as an alternative route.
Hundreds of people including women came to the street with processions early in the morning and staged demonstration.
Later, a protest procession, headed by poura mayor and Phulbari Sammilito Peshajibi  Sangathan convenor Mortuza Sarkar, was brought out.
After parading the main thoroughfares, the procession was terminated at Nimtala crossing where the poura mayor requested all to continue the blockade.
The tension mounted as a news spread across the upazila on Wednesday that multinational Company Asia Energy’s chief of operation Gary N Lye has exchanged views with some officials of Asia Energy’s Phulbari branch.
Earlier on Tuesday also, hundreds of people blockaded Dhaka-Dinajpur highway hearing the news that Gary N Lye would exchange views with officials of Asia Energy’s Phulbari branch.