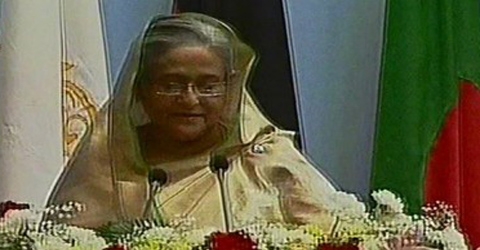 Identifying seven critical areas that require urgent attention of the Saarc member countries, Prime Minister Sheikh Hasina on Wednesday urged all the Saarc leaders to lend their support to advance implementation of the agreed regional outcomes on connectivity, putting aside their differences as the association’s achievements have been modest so far compared to expectations.

“I would urge all Saarc leaders at the podium to lend their support to advance implementation of the agreed regional outcomes on connectivity… and Bangladesh will appreciate the early signing of the Regional Motor Vehicles Agreement and the Regional Railways Agreement,” she said.

The Prime Minister was delivering her speech at the inaugural ceremony of the two-day 18th Saarc Summit being held at City Hall, Bhrikuti Mandap of the Nepalese capital. This is the third time that Nepal is hosting Saarc Summit after the ones it hosted in January, 2002 and November 1987.

Hasina said the Saarc countries need to focus on increasing intra-regional trade while early and effective implementation of Safta remains important. "We’ll particularly need to address the non-tariff and para-tariff barriers. Our people want to see robust actions on the ground. They’re more focused on ‘outcomes’ than ‘process’."

The Prime Minister also called upon the Saarc leaders to focus on undertaking more realistic, result-oriented and mutually beneficial partnership for cooperation to prosper together. "Let that be our contribution towards redeeming our pledge to our people to leave a more peaceful, progressive, connected and knowledge-based South Asia," she told her audience.

Hasina said the South Asian Association for Regional Cooperation or Saarc was created three decades ago with the core objectives of building partnership for the welfare and prosperity of the people. "Looking back, one would have the impression that its achievements have been rather modest compared to our expectations and potentials."

She, however, was optimistic of what Saarc can actually attain given the collective political will and ambitions. "What’s needed is to set aside our differences and work on collective strength for bringing real progress to the people of the region. A candid assessment and frank conversation among us is the need of the hour to bring dynamism into Saarc and its activities."

Sharing some of her thoughts on some of the critical areas that need urgent attention, the Prime Minister first said that poverty as being the common and key enemy that hinders peace and development in the region.

Noting that cooperation in increasing productivity of key cereals, inland fisheries and livestock, improving water efficiency in agriculture are crucial for attaining nutritional security of the people and eradicating poverty, Hasina underscored the need for effective operation of Saarc Food Bank and Seed Bank.

She emphasised developing the large young population of the region as human resources -- primarily by giving them quality education and effective training.

"We recognise that our education system should be need-based and innovative one with adequate exposure to scientific and technological advancement and comparable with the advanced countries," she added.

She said that the women and men need easy access to affordable and quality technical and vocational education as education and skill development need to be linked to employment and entrepreneurship.

The Prime Minister said for achieving development faster, the Saarc countries must deepen its collective efforts to develop, use and apply science-technology-innovation at all levels. "We need support in health, agriculture, food and climate change technologies. Bangladesh would call for deeper cooperation in these areas."

The Prime Minister said climate change poses a serious challenge to much of the development enterprise since intensity and frequency of disasters among the Saarc countries are rising. "The risks are so grave that for Bangladesh climate change may wipe out 2 to 3 percent of our annual GDP, including displacement of more than 30 million people by 2050."

At the Saarc level, she said the Saarc countries need to secure result-oriented implementation of the regional agreements and plans through cross-border initiatives.

Lauding the progress on the Saarc Framework Agreement on Electricity Cooperation, she said energy is a sector where the countries of this region have much to tap in terms of regional hydro-power.

"There’re aspects, like energy regulation, efficiency and conservation, regional power grid – where we can work beneficially. It is, therefore, the time to commit ourselves on regional, sub-regional and bilateral initiatives for the development of energy sector in a comprehensive manner,"

The PM said  the new Global Development Agenda requires the Saarc countries to focus on their fourth frontier - the Indian Ocean.

"There’s so much to benefit through collaborative exploration of the living and non-living marine resources. The ocean resources-based ‘Blue Economy’ can play a critical role in sustainable development of the Saarc region," she said.