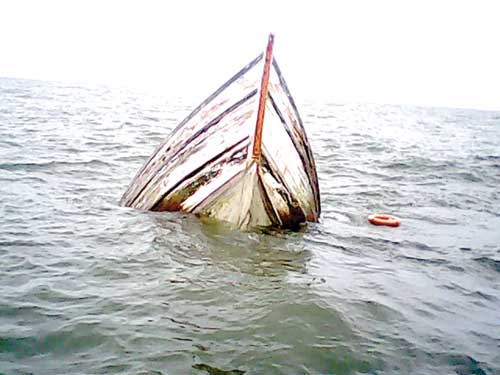 A symbolic image for the news

An elderly man drowned and 10 others were injured as a trawler sank in Meghna River at Mehendiganj upazila in Barisal on Tuesday night.
The deceased was identified as Yusuf, 60, son of Nohai Sheikh of Bhoramara village under Aminpur Police Station in Pabna.
Sources said the Barisal-bound trawler carrying 75 Muslim devotees from Roksa of Pabna sank in the river at around 8.00pm in Uttar Char Ekuria of Mehendiganj on the way to Charmani Peer Mahfil after Elishsa-bound MV Ema launch hit the trawler.
However, local people rescued 74 passengers, except Yusuf. Later, the body of Yusuf was recovered from the river.
Of the injured, critically three people were admitted to sadar hospital.
The sunken trawler is yet to be traced.