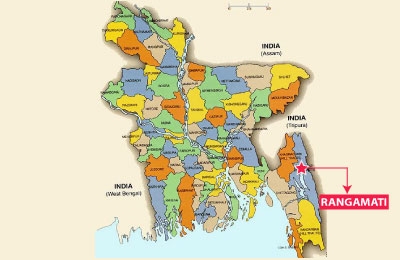 Members of a joint force rescued three forest officials from Naniachar under Langadu upazila in Rangamati 19 days after the incident, who were reputedly kidnapped by miscreants from Harikata of the upazila.
The three forest officials are conservator Farid Mia, range officer Robiul Islam and forester Bibartan Chakma of the forest department (North) of Chittagong Hill Tracts (CHT).
They were rescued from a deep forest beside the Naniachar-Malchhari Road on Tuesday night.
On November 6, miscreants picked up the three forest officials from Harikata area of Langadu upazila when they went to the area to visit a garden.
Acting on a tip off, a team of joint force comprising members of police, Rapid Action Battalion, Bangladesh Army and Border Guard Bangladesh (BGB) conducted a drive in different areas of Naniachar area on Tuesday morning, a forest conservator at Rangamati circle said.
Sensing the presence of the joint force, the kidnapers managed to flee the area leaving behind the three forest officials in deep forest beside the Naniachar-Malchhari Road.
Later, the joint force members rescued the three abducted forest officials from the area at around 8.00pm.
The rescued returned to their respective houses at night, the forest conservator added.